BOONE, IOWA – An Iowa domestic abuser was called “Satan” by the woman he nearly strangled to death, then he was sentenced to prison.

According to the complaint and affidavit filed with the court by the Boone County Sheriff’s Office, on June 19, 2017, a female came to the Boone County Sheriff’s Office reporting that Levi Aron Vaughn had assaulted her. The victim stated to the Deputy that Levi Vaughn grabbed her head, slammed it into the window, punched her in the right eye, and then strangled her around her neck until she came very close to blacking out. The Deputy noted that the victim had broken blood vessels in the right corner of her eye which are consistent sign of strangulation. The Deputy also saw that the victim had bruising around the left side of her neck. The victim stated that the assault occurred while traveling with Levi Aron Vaughn as they were crossing the bridge within the city limits of Frasier.

Levi Aron Vaughn pled guilty to Count 1 of the Trial Information charge
ing the defendant with Domestic Abuse Assault, Strangulation Causing Injury. This count has a maximum sentence of five (5) years in prison with the Iowa Department of Corrections. The court set a sentencing date for October 11, 2017, where both sides were able to make an open recommendation to the court for sentencing.

A sentencing hearing was held on October 11, 2017. Assistant Boone County Attorney, Matt Speers, read portions of a statement by the victim about the impact of the crime. In it she stated, “As he (Levi Vaughn) was strangling me, he was yelling at me telling me that I deserved this. I could feel myself suffocating and the life being taken out of me. I was scared and helpless. I didn’t want to die that day. I couldn’t hear, nor speak anymore as my breath was being taken out of me by the hands of SATAN.”

The State of Iowa was represented by Assistant Boone County Attorney, Matt Speers. The case was investigated by the Boone County Sheriff’s Office. 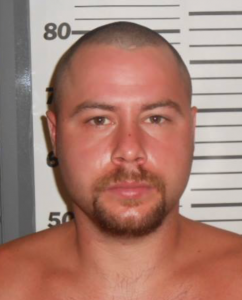