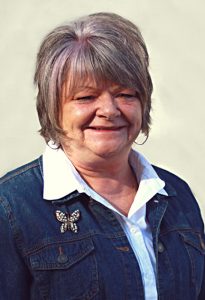 Sheila Riden, 64, of Charles City, passed away Wednesday, February 15, 2017 at her home. Cancer tried to slow her down, but she refused to sit around and feel sorry for herself. She continued to do exactly what she wanted to do. Heaven just received another Angel among them today. Her bright eyes and smiling face and her gentleness have come to an end on this earth. She joins the rest of her family in Heaven.

A funeral service for Sheila Riden will be held 2:00 p.m. Saturday, February 18, 2017 at Trinity United Methodist Church in Charles City with Pastor Jim Beranek and Pastor Janet Dorenkamp officiating. Burial will be at Sunnyside Memory Gardens in rural Charles City.

Visitation will be at Trinity United Methodist Church from 6:00 to 8:00 p.m. Friday, February 17, 2017 and will continue one hour prior to the service at the church on Saturday.

Sheila Faye (Burzette) Riden was born February 25, 1952 along with her twin sister Sherry to Melvin and Lois (Mathers) Burzette in Mason City, Iowa. Sheila attended school in Charles City graduating in 1971 from Charles City High School. In her senior year she met the man of her dreams, Gary Riden. In 1973, Sheila attended The Lakeland Medical and Dental Academy in Minneapolis, Minnesota, graduating in the Medical Assistance program. She returned to Charles City to work at the office of Doctors Scheimedal and Pelz.

Sheila worked as a supervisor at Comprehensive Systems for 10 years. Then in 1986 she started working for Solvay Animal Facility until 1991. In 1992 she attended and graduated from the Massage Therapy Program in Hampton, Iowa. Sheila ran a successful massage therapy business until 2007 when she started working for Chautauqua Guest Homes as an Activity Director. She held this position for eight years. Sheila never met a stranger and could talk to anyone and give a compliment to them. She had a heart of gold and would help anyone that needed it. Sheila’s greatest joy in life was her husband, children and grandchildren. She had a mischievous side to her. Her smile and eyes could tell a story. Sheila could give the best hugs and holding of hands to the elderly and to anyone who needed it.

She was preceded in death by her mother and father; eight siblings: Robert, William, Gregory, Sondra, Fredrick, Donald, Susan and her twin, Sherry; and her father-in-law, Floyd Riden.