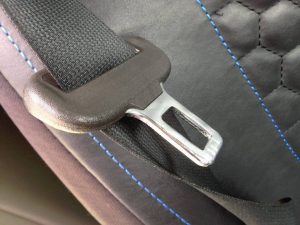 Iowa’s seat belt compliance rate is at 93 percent, one of the best in the nation but, still, too many of the state’s traffic fatalities are unbelted. Those are lives that could have been saved. The consequences of not buckling up are too high, don’t become a negative seat belt statistic, always buckle up!

National Highway Traffic Safety Administration (NHTSA) statistics show that passenger vehicle occupants are buckling up more during the day but not enough at night. The May 23 – June 6, 2016 Click It or Ticket mobilization focuses on seat belt violators 24/7, but a strong enforcement effort will be made between the nighttime hours of 6 p.m. and 6 a.m., due to the significant number of violators and fatal crashes during that time.

“Law enforcement plays an important role in helping protect the safety of our citizens,” said Pat Hoye, Chief of the Iowa Governor’s Traffic Safety Bureau. “Time after time, we see the deadly results that come from drivers and passengers not wearing their seat belt. Wearing a seat belt is one of the most important steps in increasing survivability in a crash.

As you travel near or far this Memorial Day, remember to buckle up in the back seat as well as in the front. Rear seat passengers are three times more likely to die in a crash if they are unbuckled. In real life we don’t get a second chance.