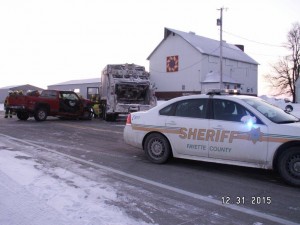 WEST UNION, IOWA – A tragic accident left three people – including two from Nashua – with life-threatening injuries when a pickup truck slammed into a garbage truck that was backing into a farm driveway.

The Fayette County Sheriff’s Office reports that on December 31, 2015 at 6:43 AM, the deputies with that agency took a 911 call of a two vehicle accident two miles west of West Union on Hwy 18. Once deputies arrived, they found a garbage truck driven by Dustin Jon Bunn, age 23 of Fairbank and his passenger Jeremiah M. Geary, age 35 of Fayette, were backing the truck into a farm drive when a pickup truck driven by Phillip Wayne Emerson White, age 24 of Nashua and his passenger Melinda Lee Scribner, age 41 also of Nashua collided with the garbage truck. 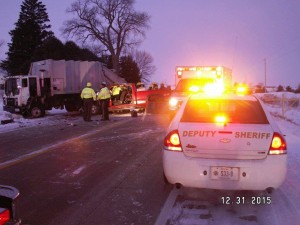 The Sheriff’s office was assisted at the scene by the West Union Fire Department, The Department of Transportation Enforcement, West Union Police, Tri Sstate and Fayette Ambulance services. Also, White and Scribner had a Dog in their vehicle and it was taken to the West Union Vet Clinic for treatment.