GREENE, IOWA – A former Mason City man who faced plenty of trouble in that community was arrested Christmas Day after damaging a store in Greene in Butler county.

According to a report on KLMJ Radio, the Butler county sheriff’s office responded to a disturbance on December 25 at a store (that was not named) in the town of Greene at the  200 block of West Traer Street.

Allegedly, 50-year-old Daniel Vining of Greene (formerly of Mason City) had caused “a significant amount of damage inside the store”. Law enforcement officers had to use a taser to subdue him, reportedly, before he was taken into custody and arrested on a charge of felony D second-degree criminal mischief. Vining remains held in the Butler county jail as he awaits a court date.

Vining has an extensive criminal record, with numerous violent domestic assault arrests, felony arrests, and at least one dangerous car chase through Mason City back in 2002 that lasted 16 miles that put him in the hospital. 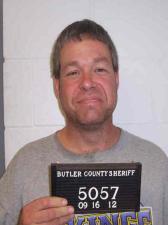