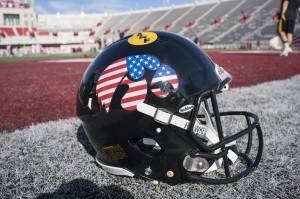 Iowa’s black helmet features the Iowa tigerhawk logo on the right temple, in red, white, and blue, and not the normal gold color. This logo is in recognition of men and women, in all branches of the military around the world, who are serving, or have served, their country. The right side of the helmet will, as usual, include the ANF (America Needs Farmers) logo above the tigerhawk. (Brian Ray/hawkeyesports.com)

Iowa has won five consecutive true road games for the first time since 2008-09.

QB C.J. Beathard is 10-0 as Iowa’s starting quarterback, a record that includes a 5-0 mark on the road, a 5-0 mark at home, and a 6-0 mark in the Big Ten. Numbers include 162-of-278 passing for 2,076 yards, 11 touchdowns, and four interceptions, and 247 yards rushing with four rushing touchdowns. He is the first quarterback in school history to win his first nine career starts.

DB Desmond King recorded his eighth interception of the season in the fourth quarter. He leads the nation in the category and ties the Iowa school record for interceptions in a single season, joining Lou King (1981) and Nile Kinnick (1939).

RB Akrum Wadley’s 65-yard touchdown run on Iowa’s first possession was a career long. Wadley rushed for 120 yards on 12 carries. He has two 100-yard rushing games this season, three in his career.

RB LeShun Daniels had his first career multi-touchdown game. Daniels scored from four yards in the second quarter, and again from one yard in the fourth quarter.

LB Josey Jewell had a team-high 15 tackles and 11 solo stops. Both are career-highs.

Indiana won the toss and deferred to the second half. Iowa received the opening kickoff in eight of nine games this season (Wisconsin), and has outscored its opponents 50-16 in the first quarter. In 17 seasons as Iowa’s head coach, Kirk Ferentz and the Hawkeyes received the opening kickoff in 170-of-209 games (103-67). Iowa has started the game on defense in 39-of-209 games under Ferentz (21-18).

The Hawkeyes host Minnesota on Saturday, Nov. 14 at Kinnick Stadium. Kickoff is at 7 p.m. on BTN.