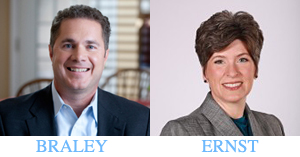 MASON CITY – As the 2014 elections reach a fever pitch, Joni Ernst is frantically traveling the state, trying to push ahead of Congressman Bruce Braley in the place the matters most – the ballot box – and not just the polls.

As part of her final push to the November 4 election for U.S. Senate, she will be in Mason City on Saturday, November 1 along with Governor Terry Branstad for one more Republican rally.

The event will be held at 10:45 AM at the Park Inn Hotel in downtown Mason City. Republican candidate for the Iowa Senate Shawn Dietz has already indicated he will be attending, as well.

Ernst was in Charles City and other locations Monday, making an appearance with Senator Chuck Grassley at Aromas coffee shop there. She claims to have visited 8 counties Monday – including the town of Osage in Mitchell county – and will visit 7 counties Tuesday.

On the same day Ernst will be in Mason City, her opponent, Bruce Braley, will be in Des Moines with former President Bill Clinton and musician James Taylor. Braley has won key endorsements from The Des Moines Register and the Cedar Rapids Gazette, as Ernst has cancelled all meetings with newspaper editorial boards as the campaign wrap up.

Branstad, meanwhile, is coasting to victory, and reportedly mocked the campaign of his opponent, Jack Hatch, saying Monday that Hatch’s campaign is inept.

Hatch will be in Mason City Wednesday morning at 8:00 AM at the Democratic headquarters, 11 E State Street.  He finally launched a TV ad Monday after being off the air for weeks due to financial issues within his campaign.
0 0 votes
Article Rating
Subscribe
Login
46 Comments
Newest
Oldest Most Voted
Inline Feedbacks
View all comments