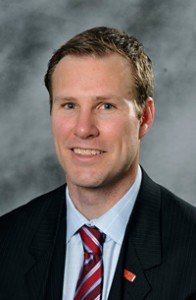 McKay, an athletic 6-8 forward, played at Indian Hills Community College under the direction of Barret Peery before signing with Marquette in 2013. The Milwaukee, Wis., native decided to transfer from the program this fall before playing a game. After signing an acceptance of admission today, McKay will have one and a half years to play for the Cyclones starting on Dec. 20, 2014.

“The relationship I have with the coaches and the style of play were big factors in choosing Iowa State,” McKay said. “I like to play an up tempo style and Coach Hoiberg runs an NBA style offense that will compliment my game. I’m looking forward to getting to Iowa State and playing with the guys.”

McKay became the first player in IHCC history to be named a first team All-American twice in a career. A versatile big man, McKay finished his career with 1,022 points, averaging 16.8 points and 8.9 rebounds in 2012-13. He reached double figures in scoring in 59 of his 63 career games.

“We are excited about adding Jameel to our program,” Hoiberg said. “He is a player that can play multiple positions and does so with a lot of energy. He adds length and athleticism to our roster and fits in perfectly with what we are trying to do on the court.”

A teammate of current Cyclone Dustin Hogue at IHCC, McKay helped the Warriors to a 59-8 record in his two seasons in Ottumwa. In his first season (2011-12), he averaged 14.6 points and 7.7 rebounds.

McKay prepped at Pulaski High School in Milwaukee and was named City Conference player of the year as a senior.