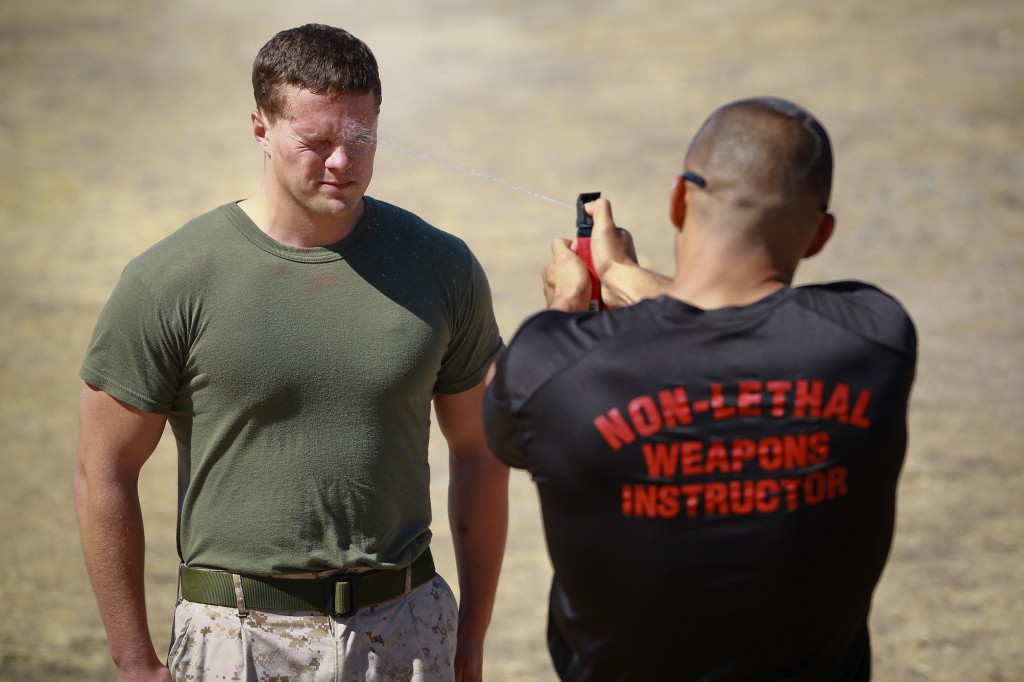 MARINE CORPS BASE CAMP PENDLETON, Calif. – Marines serving with Delta Company, 1st Battalion, 1st Marine Regiment, endured what they said was one of the most painful training courses they’ve experienced in the Marine Corps.

The infantrymen were pepper sprayed in the face and ran through a course where they fought off notional aggressors, played by fellow Marines holding punching bags.

Nonlethal weapons instructors with 1st Law Enforcement Battalion ran the course, emphasizing that the Marines focus on defending themselves from the aggressors rather than the burning sensation on their faces.

“There’s an excitement and anxiety factor that builds before they get sprayed,” he said.

He stressed there’s a greater importance to the training than just dealing with the pain.

“A Marine always needs to know the capabilities of the weapon he’s employing,” said Serna, a native of Pomona, Calif. “Marines also must know how to react in the chance they get cross contaminated in a situation.”

Delta Company began the training with some classes on the spray substance, Oleoresin Capsicum, and employment tactics. The day ended with the training course where Marines fought through the effects of pepper spray.

The Marines ran through the course individually. It started with getting sprayed across the forehead with pepper spray and rolling right into five jumping jacks. At the end of the exercise, the Marine was to open his eyes and look to see how many fingers the nonlethal weapons instructor was holding up. The Marine then ran to the four stations where he executed punches, knee strikes, baton strikes and a compliant take down using a training rubber pistol to simulated aggressors.

Each station was 50 meters apart and the effects of the pepper spray intensified with time as the OC seeped into their eyes, nose, mouth and pores.

Lance Cpl. Garrett Ray, a fire team leader with Delta Co., said it’s crucial to experience the effects of pepper spray before using it on someone else.

“Having the experience of being OC sprayed will help you know what to expect if it happens in a combat environment so you’ll be able to protect yourself and your buddy next to you,” said Ray, a native of San Antonio.

He said it wasn’t his first time being pepper sprayed.

“I knew a little bit about what to expect,” Ray said. “Still, it wasn’t fun. I was pretty good until my second station when my eyes started to swell up.”

Marines with Delta Company are preparing for a deployment to the Middle East where they’ll provide embassy security. Ray said the nonlethal weapons training course would prove valuable if they ever have a combative encounter with unarmed civilians in protest.

“We have to go by the lesser means of force,” Ray said. “You don’t have to use lethal force on everyone you encounter in combat. We’d rather detain a person and refrain from going to that higher means of force.”

The training ended in red-faced, teary-eyed Marines dousing with water to wash away the pepper spray. Even though their facial expressions displayed distress, the motivation and camaraderie was at a high level as they relived the moments when the effects of the pepper spray peaked.

Ultimately, there was a lesson learned.