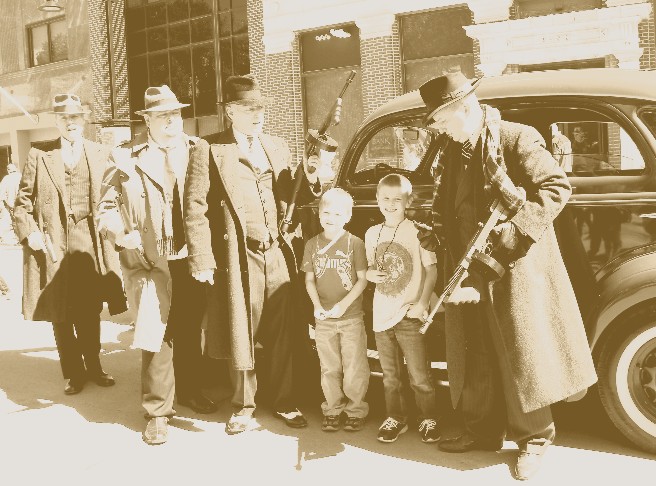 MASON CITY – Saturday was the day to see a re-enactment of the 1934 John Dillinger robbery of First National Bank in Mason City.

Main Street Mason City describes the event as a “festival in historic downtown Mason City celebrates the spirit of an American era, the 1930’s, and commemorates the March 13, 1934 robbery of the First National Bank by John Dillinger.”

There were three chances to see the infamous Dillinger bank robbery, at 11:00 am, 1:00 pm and 3:00 pm. People could relive history as they watched the historic robbery, complete with hostages & tommy guns.

The event was part of the Great River City Festival which had activities all weekend long. Starting Friday going through Sunday, there was a Sculpture Scavenger Hunt, the River City Ramble Pub Crawl, the Ethnic Luncheon, the Mason City Market and Historic Downtown Tours.

Music was provided Saturday by musician Poor Howard Stith. Poor Howard had his guitar case out for donations.

Tom and Ashley DeWaard, from Rock Falls, had their two sons, Nathan, age 7 and Joey, age 6, at the festival for the first time. “It was good,” said the boys, who got their pictures taken with the Dillinger gang, got bullets, and Nathan was given Dillinger’s gun to hold, “that’s not fair,” said his younger brother Joey.

Another family of newcomers to the festival were the Rodmans, of Mason City. Ethan, age 10, Daulton, age 9 and Kaci, age 7 were enjoying meeting the actors with their father Andrew. While the boys were getting pictures taken with the “good guys” the police officers, Kaci was still wondering about the shooting. “They were shooting out the window,” she said, pointing at the window of the First National Bank Building.