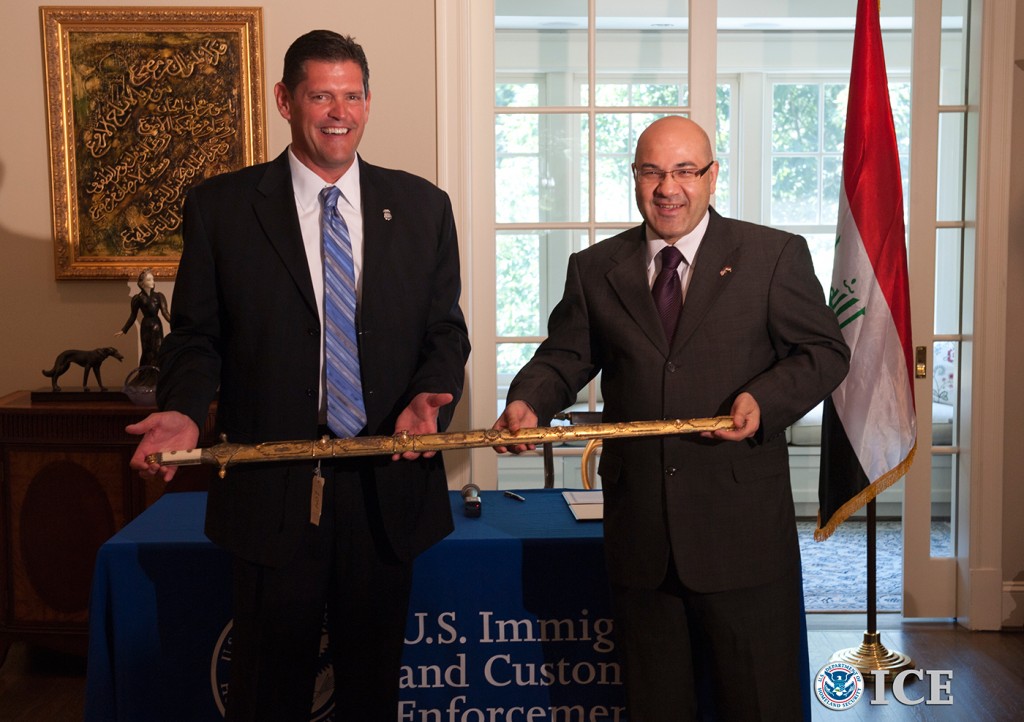 WASHINGTON – A ceremonial sword, looted in 2003 from Saddam Hussein’s personal office in Baghdad, was returned to the Republic of Iraq Monday by U.S. Immigration and Customs Enforcement’s (ICE) Homeland Security Investigations (HSI).

The sword, which had been smuggled into the United States by U.S. military personnel, was repatriated at a private ceremony held at Iraqi Ambassador Lukman Faily’s residence in Washington.

“Cultural property — such as the sword being returned today to the people of Iraq — represents part of a country’s history that should have never been stolen or auctioned,” said HSI Associate Director James Dinkins. “We will continue conducting these types of investigations to ensure that current and future generations aren’t robbed of their nation’s history.”

“On behalf of the government and the people of Iraq, I would like to express thanks and appreciation to the U.S. government and Homeland Security Investigations special agents – the soldiers behind the scene – and all of those who contributed in restoring this heritage that belongs to Iraq and its people,” said Ambassador Faily. “Today is one of these historic days that documents the deep relationship, cooperation and friendship between Iraq and the United States and also shows again the U.S. commitment for rebuilding Iraq and preserving its cultural heritage.”

The sword is a 43-inch embellished blade and sheath with gold inlaid Arabic writing along the edge of the blade that declares it to be a gift to Saddam Hussein. It was sold in October 2011 to the Amoskeag Auction Company (AAC) in Manchester, N.H., and advertised in their Jan. 7, 2012, auction catalogue as having been removed from Hussein’s personal office in the Iraqi military command complex in Baghdad by the U.S. Army 126th Military History Detachment after the regime fell in 2003. The catalog also said that the consignor was attached to the unit as a combat historian, that the sword was not claimed by the U.S. government and that the consignor was granted permission to keep the sword as a souvenir.

In January 2012, HSI special agents in Manchester learned that it was being auctioned and initiated an investigation.

Although the sword was sold at auction for $15,000 by AAC Jan. 7, 2012, the sale had not been consummated by an exchange of money and the object had not yet been shipped to the purchaser by AAC. On Jan. 9, 2012, HSI special agents seized the sword as a possible Iraqi cultural artifact.

HSI special agents coordinated with the U.S. Department of State and the U.S. Department of Defense (DOD) regarding the validity of the sword’s importation into the United States and the regulations surrounding the importation of war trophies from Iraq. It was determined that this ornate ceremonial sword cannot be considered a modern battlefield weapon and is therefore not eligible to be exported as a war trophy.