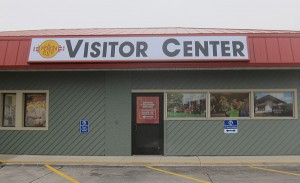 Spirit of Tourism Award was given to the North Iowa Events Center. The organization was selected due to their exemplary contributions to Mason City tourism serving as a catalyst with exceptional results. In the past few years, with lots of hard work, dedication and the zest to succeed the volunteer board of the North Iowa Events Center has made several positive improvements. Under their direction and help from many public and private sponsors, they have taken a struggling organization and turned it around to be an economic driver for the area. A few of the changes implemented included a name change, brand imaging campaign, enhanced marketing/ promotion strategies and the creation of new events. These initiatives have increased income while also decreasing expenses creating a stronger more viable facility. In addition, each and every year this facility serves as the host site to numerous tourism events. The economic impact from the visitor spending left behind by those attending these activities is estimated to generate over $3 million into the area’s economy. The North Iowa Events Center has achieved success, overcome adversity and endured many challenges. The board realizes there is much more to accomplish and they readily embrace these challenges.

Tourism Excellence Award which recognizes an area attraction or event which serves as a model of professional excellence was presented to Wright on the Park, Inc. Wright on the Park, Inc. successfully raised $18 million to rehabilitate and restore the Frank Lloyd Wright designed Historic Park Inn Hotel and City National Bank building. This daunting but doable challenge was completed by a volunteer board, a small passionate staff and numerous supporters. The completion of this project has created a positive economic impact while generating media attention for the community from across the United States and around the world. Today, Wright on the Park’s work, along with continued preservation of the hotel, now includes educating the public about the building, Wright and Prairie School architecture. They continue to host various conferences and tours as well as sponsor special events, speakers and workshops, helping promote Mason City as an architectural tourism destination.

Jodi Ball, President of Visit Mason City, also commented on the accomplishments from the past year, most notably Visit Mason City’s completion of a new visitor information center which assisted over 3,000 visitors last year, influencing an estimated $14.6 million of direct visitor spending in the community, fulfilling over 44,100 visitor information requests and successful attraction of 121 meeting, sport events and group tours resulting in an estimated 70,500 visitors to the community.