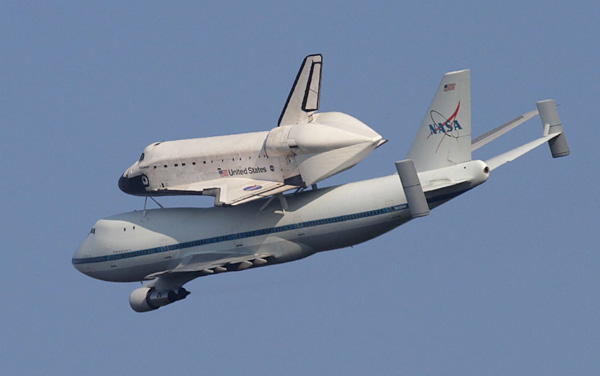 Perched atop a modified Boeing 747, the retired orbiter departed Kennedy Space Center in Florida at 4:22 a.m. EDT Wednesday en route to Houston, the first leg of a two-day trek to California.

The threat of thunderstorms twice pushed back the shuttle’s original departure date of Monday. But despite the delay, NASA officials said Endeavour’s cross-country farewell tour would proceed as planned.

It includes a series of 1,500-foot flyovers above several NASA sites across the southern United States, including Florida’s Space Coast, Stennis Space Center near Bay St. Louis, Miss., and the Michoud Assembly Facility in New Orleans. The shuttle will glide over Houston, Clear Lake and Galveston in Texas before landing at Ellington Field near NASA’s Johnson Space Center, where it will spend Wednesday night.

On Thursday, the 747 will refuel at El Paso’s Biggs Army Airfield before heading to Edwards Air Force Base in California, where it will be housed overnight.

The shuttle will depart the Mojave Desert base about 7:15 a.m. Friday and will fly low over Palmdale, Lancaster, Rosamond and Mojave before heading north to Sacramento, NASA officials said.

There, Endeavour will fly over the Capitol and turn to San Francisco, where those hoping to catch a glimpse of the shuttle are advised to watch from one of several Bay Area museums, including the Chabot Space and Science Center, the Exploratorium, the Bay Area Discovery Museum, the Lawrence Hall of Science and the Monterey Bay Aquarium.

Once the shuttle reaches the Los Angeles area about 10:30 a.m., the orbiter will be carried over landmarks including the Getty Center, the Griffith Observatory, Malibu and Disneyland before landing at Los Angeles International Airport. It will also fly over the California Science Center in Exposition Park, its new permanent home.

But Endeavour’s journey won’t end Friday. The shuttle will be housed at a United Airlines hangar until Oct. 12, when it will begin a two-day celebratory trek through the city’s streets to the museum’s new Samuel Oschin display pavilion. The exhibit will open to the public Oct. 30.