The 2012-13 hunting seasons for cottontail rabbits and squirrels (fox and gray) open Sept. 1. 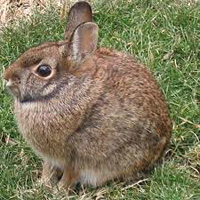 Cottontail Rabbits
Based on the DNR’s August roadside survey of upland game, southern Iowa has the best rabbit densities heading into fall, but hunters pursuing cottontails will likely find mixed results across the state compared to last year.

“The best form of rabbit hunting is done with the companionship of one or more beagles,” Bogenschutz said. “Beagles and other trailing dogs can increase your success and improve the quality of the hunt.”
The cottontail season remains open until February 28, 2013, the daily bag limit is 10, and the possession limit is 20. Shooting hours are from sunrise to sunset.

Hunters can view the roadside counts of cottontails on the DNR’s website.

Squirrel populations typically peak following good mast years, and last fall there was a bumper crop across Iowa for white oaks and black walnuts. Shagbark hickory and red oak mast production was average to above average, with a better mast production in southern Iowa.

“White oaks produced a poor crop in the fall of 2010, so this last fall was a positive change in hard mast production in Iowa’s woodlands,” said Todd Gosselink, forest wildlife biologist for the DNR.

Iowa’s mix of agriculture and woods make excellent habitat and provide plentiful waste grain for squirrels during the non-growing seasons.

“Squirrel numbers should be good for this year’s fall hunting season,” Gosselink said.

Fox squirrels can be found anywhere there are a few acres of trees, but gray squirrels are generally limited to the heavily forested areas in eastern and southern Iowa.

Squirrel hunting is best done in one of two ways, said Gosselink.

“The sit-and-wait technique is used near likely feeding areas such as beneath oak, walnut, or hickory trees or along corn-forest edges. The still-hunting technique is employed by slowly walking through forested areas and stopping frequently to watch for feeding squirrels. The best hunting times usually are during the morning and afternoon feeding hours,” Gosselink said.

The squirrel season opens September 1 and extends through January 31, 2013. The daily bag limit is 6 (fox and gray squirrels combined) and the possession limit is 12. There are no restrictions on shooting hours.