Twins break down in extra-innings loss to Rangers 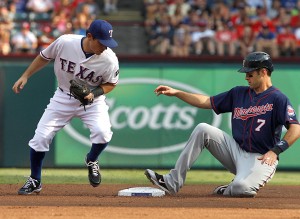 ARLINGTON, Texas — The Minnesota Twins had one foot out of Rangers Ballpark with a victory on Sunday night. Righthander Cole De Vries had an outstanding start. Reliever Casey Fien was solid in his Twins debut. The offense tacked on insurance runs against former teammate Joe Nathan.

But, on the way to the All-Star break, the Twins broke down in the field and on the mound.

Texas scored three unearned runs in the ninth to force extra innings. The bullpen held off the Rangers as long as it could, but Texas loaded the bases in the 13th, and Ian Kinsler’s RBI single off Alex Burnett gave the Rangers a 4-3 victory.

“A very tough loss,” Twins manager Ron Gardenhire said. “We thought we had it in hand there.”

With the Twins up 3-0 in the bottom of the ninth, shortstop Brian Dozier booted Kinsler’s leadoff grounder, then threw wildly to first, a two-base error that was Dozier’s 13th error in 53 games. Kinsler went to third on a wild pitch then scored on a groundout to make it 3-1.

“Balls like that are supposed to be made (into outs) 100 percent of the time,” Dozier said.

Perkins got Josh Hamilton to pop out, putting the Twins an out away from taking the series. But Adrian Beltre singled. Nelson Cruz fell behind 0-2 but then doubled to right to put runners on second and third. Michael Young also fell behind 0-2, but Perkins hung a slider and watched it get slapped to right for a tying two-run single.

De Vries got a tough luck no-decision as Perkins couldn’t make the big pitch to end the game.

“I wanted to get it down,” Perkins said of his final pitch to Young. “It was more location than anything.”

De Vries is a symbol of the Twins’ problems this season. He’s one of 11 pitchers to start a game for the Twins, and the seventh starter in the past seven games. But, on Sunday, he made a case to be part of the solution during the final 77 games, showing a breaking ball that was as sharp as it has been in five major league starts.

The only thing that slowed him down was a 46-minute rain delay in the fourth inning preceded by a frightening clap of thunder near the stadium, one that had players scurrying for cover.

De Vries shook off the delay to pitch seven innings, holding Texas to three hits and a walk while striking out five. After getting an RBI single by Justin Morneau in the sixth, the Twins added two more runs off Nathan in the ninth.

“They gave everything they had,” Gardenhire said of his players. “Our bullpen came in and was throwing the ball. And Cole De Vries was unbelievable.”

The Twins flew back to the Twin Cities after the game. From there, they scattered throughout the country for a four-day break before returning Friday.

Though they are 36-49, the Twins can take several positives out of the first 85 games. Josh Willingham is the cleanup hitter they thought he could be. Scott Diamond looks to be a legitimate starter. Ben Revere can hit. Their bullpen can protect leads, usually.

But they don’t know what they are getting from their rotation on a week-to-week basis.

De Vries could be part of the rotation solution, especially if he pitches like he did Sunday … and the Twins limit their mistakes.

“These last couple weeks, we have been hanging in there with teams that are better than us in our division or the American League,” De Vries said. “We’re playing good baseball. It’s tough to lose like that, but it’s a positive going into the break for what we can do in the second half.”