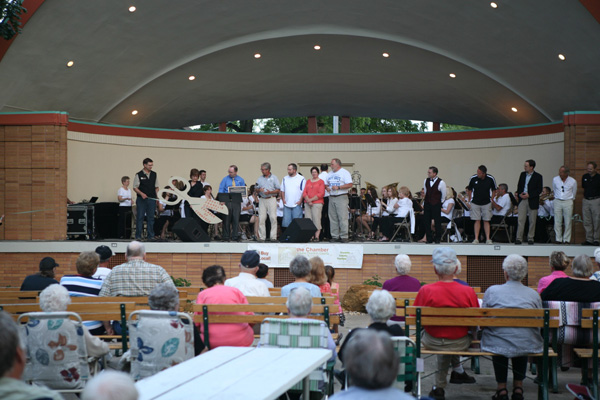 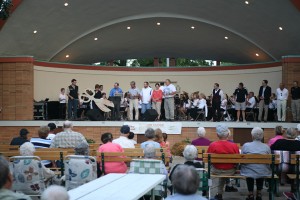 Hampton, IA – The rededication and Grand Re-Opening of the municipal band shell took place Tuesday, June 5th in Hampton. The festivities started with the opening of the farmers market in Band Shell Park at 5:00 p.m. A freewill dinner to benefit the Hampton Senior Center also got underway at 5:00. After a brief downpour Brook Boehmler, Executive Director of the Greater Franklin County Chamber of Commerce welcomed the gathering crowd.

As the sun came out the Municipal Band All Star Concert got underway with entertainment being provided by several local and returning alumni musicians being accompanied by Leon Kuehner, retired Hampton-Dumont High School Band Director, and noted local musician. Brian Stevens, Retired Municipal Band Director (1978-2010) and retired Hampton-Dumont Middle School Band Director, emceed the event providing
levity and comical anecdotes about many of the returning alumni as he introduced them.

Following the All Star Concert the Plaque Presentation and Ribbon Cutting took place. Mayor Shawn Dietz and former Mayor Diane Weldin (2004-2011) spoke of the significance of the fact that the historic Band Shell could have been torn down, but thanks to Kyle
Munson, Des Moines Register columnist, for writing the story that brought the plight of the band shell to light, the band shell was saved. Former Mayor Weldon also thanked Doug Frye, retired – RDG Planning & Design, and Scott Allan – RDG Planning & Design who after seeing the story in the Des Moines Register, contacted local Hampton
officials telling them they believed that the band shell could be restored rather than destroyed.

Two years ago it was discovered that the band shell was falling down and was unsafe to hold the traditional once-a-week summer Municipal Band Concerts. After assessing the situation and costs it was believed that the best option was to tear down the old shell and build a new one. An option that seemed to be too sad to bear.

The band shell was first dedicated on June 27, 1959. Iowa legislators had enacted a law allowing municipal governments to dedicate a portion of tax funds to be used for developing and supporting municipal music programs. Hampton was the second city in Iowa to implement this new law.

Munson, a columnist with the Des Moines Register, who was in attendance, reacted to the story by featuring it in his column. Through his story, awareness was raised and caused Frye and Allan of RDG Planning & Design, also in attendance, to contact local officials with an idea for what was thought to be an un-doable feat – save the
current structure.

The rich musical tradition of Hampton has had strong community support that has continued to present. This heritage caused the community, lead by many, including Stevens and Kuehner, to begin raising funds needed to restore, rather than destroy, the failing band shell structure. Raising the needed funds well ahead of the deadline
provided proof that the community of Hampton was strongly in support of preserving the proud musical heritage of their band shell.

At 8:00, precisely at the stroke of the eighth bell toll of the County Courthouse Clock, as tradition dictates, the ribbon was cut and Director Chris Sauke waived the fifty-five area musicians into the first note of America. Two members of the local chapter of the American Legion raised and saluted the American Flag. A scene that evoked strong emotions among those in attendance.

Current director Sauke led the band through fifteen selections, one of which was played at the original dedication ceremony in 1959. At one point Sauke commented that he noticed the “very cool effect” of the echo of the last note of a song off of the Court House across the street. Sauke stated, that because of the very few times he has directed in the Band Shell, he had not noticed that until Stevens had told him about this effect. He noted further, that he was looking forward to many more years of hearing this effect.

The re-dedication concert and ceremony ended with the traditional Star Spangled Banner.

The municipal band, under the direction of Chris Sauke, and consisting of fifty-five area musicians of all ages will hold concerts every Tuesday evening, in the traditional location of the band shell, through July 3rd, beginning precisely on the eighth toll of the courthouse clock – as tradition dictates – of course! 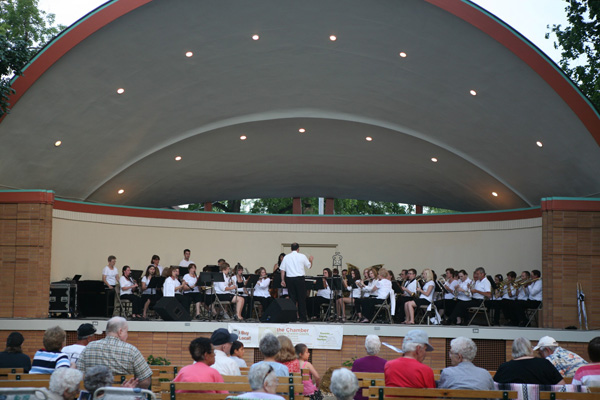 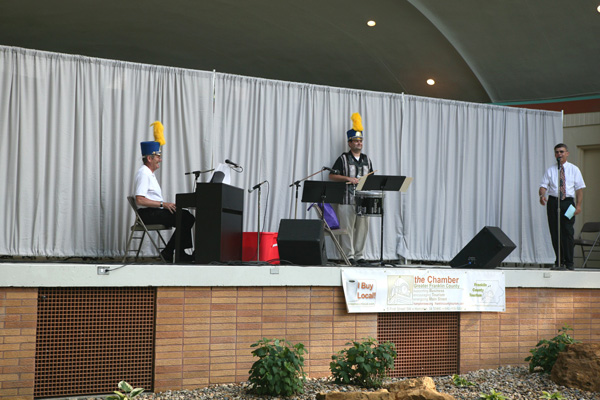