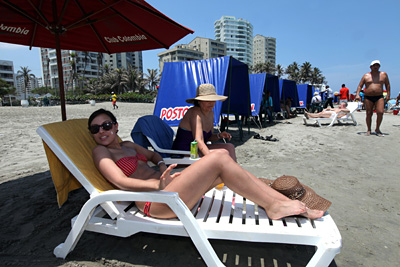 The women generally do not approach the men sitting at tables in the middle of the dark room, but occasionally one of the men stands up and asks one or more of the women to join him.

(PHOTO: Melissa Frasser and her mother Monica Lopez, back, both from Bogota, Colombia, enjoy a day in the sun at the beach in front of the Hotel Caribe in Cartagena, Colombia, Saturday, April 21, 2012. )

Then they order drinks and discuss business. Vicky, a 20-year-old clad in a mini-dress with large polka dots, offered sex for $120 per hour at a man’s hotel.

Hundreds of similar offers occur every night at dozens of nightclubs in this international resort on Colombia’s Caribbean coast 409 miles northwest of Bogota, the capital. But La Dolce Vita, at the corner of First Street and Adm. Brion Avenue, sits one block from the Hotel Caribe, the epicenter of a mushrooming prostitution scandal involving 12 U.S. Secret Service agents and 11 members of the U.S. armed forces.

Previously 10 armed forces personnel were said to be involved, but on Friday a U.S. Southern Command spokesman in Miami said 11 military men were being investigated: six from the Army, two from the U.S. Marine Corps, two from the Navy and one from the Air Force.

The military men and the Secret Service agents were part of advance teams to prepare President Barack Obama’s visit to attend the Summit of the Americas April 14.

Dania Suarez, a 24-year-old single mother, helped trigger the scandal when she complained loudly in a hallway of the Hotel Caribe early on April 12 that a Secret Service agent staying there failed to pay her the $800 sex fee. He only offered $30.

While Vicky and other women said early Saturday that the Americans did not pick up women at La Dolce Vita, they defended Suarez because prostitution is a legal way to make a living for young women who work day jobs in offices and stores or attend school.

Two percent of young female college students in Cartagena moonlight as escorts and prostitutes, according to a study from the University of San Buenaventura quoted in Friday’s edition of the Cartagena newspaper El Universal, which also published pictures of Suarez in a bikini.

Though many here fear the scandal may further tarnish Colombia’s image, one unifying strand in the local fallout of the sordid scandal was that many Cartageneros, as local residents are known in Spanish, view the agent as the villain for trying to stiff a young woman who is only seeking to feed her 9-year-old son.

“This is all legal,” said Vicky, the only one of the women at La Dolce Vita willing to talk at length. “This was the fault of the man who didn’t pay.”

Her view was echoed by more than a dozen other local residents interviewed on the streets of Cartagena Saturday as the city continues to reel from the scandal.

“The women were just trying to make a living,” said Melissa Frasser, a bank manager from Bogota who talked while sipping a drink and sunning herself on a beach across from the Hotel Caribe. Frasser was here for the weekend.

In the end, she added, the more “negative impact will be on the reputation of the Secret Service, not Cartagena, since prostitution happens everywhere.”