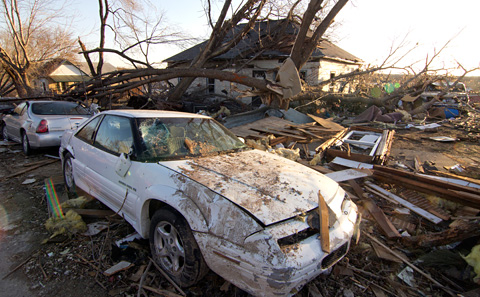 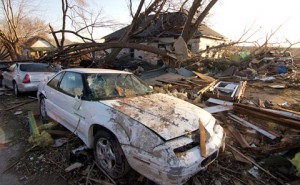 HARRISBURG, Ill. — With the walls torn off three rooms by a powerful tornado Wednesday morning and the windows blown out of four others, the worst was yet to come for this small city’s hospital.

(PHOTOS: In an unusual February thunderstorm the small Kansas town of Harveyville was devastated by high winds late Tuesday night. Wednesday, February 29, 2012, the residents of the town tried to pick up the pieces after the storm.)

Among the scores of injured neighbors who hobbled or were wheeled in, four were dead. And one of the dead was a young nurse from the staff, pulled by rescuers from her shattered apartment.

“You had nurses here facing lots and lots of trauma in a building that had been damaged and they had lost one of their own,” explained Vince Ashley, chief executive of the Harrisburg Medical Center.

“It was dark and wet and everything you can imagine all at once,” he said as some equilibrium was returning to his tattered building, where glass littered the floor and wires hung from ceilings.

Whole neighborhoods were flattened in this community of 9,000 people, about 100 miles southeast of St. Louis. Six people were killed here as at least 16 tornados swept from Nebraska to Kentucky.

Missouri counted three dead, in Buffalo and the Cassville and Puxico areas.

The Harrisburg twister was an E4, the second-strongest category, the National Weather Service’s Rick Shanklin deduced from the damage. He said it scoured a path about 200 yards wide with wind of up to 170 mph, splintering buildings and tossing vehicles like toys.

It moved through the Country Club Hills subdivision so quickly that Dr. Vinay Mehta never had a chance to leave his upstairs bedroom. “It came so fast, and then it was gone,” he said. “It lasted no more than 30 seconds.”

Mehta ventured outside, where power lines crackled and many of his neighbors’ homes were destroyed. The surgeon walked a few blocks to the hospital and treated a lot of broken bones. Other patients were airlifted out, he said, noting, “Some of them had serious problems.”

Storm spotters gave Harrisburg about 30 minutes of warning before the tornado cut a swath across the southern part of the city just before 5 a.m.

Forewarned, the medical center moved patients away from vulnerable areas. Afterward, it transferred out the patients it could while dealing with a flood of incoming injuries. Ashley said none of the 12 patients in the damaged unit was hurt.

Saline County Sheriff’s Lt. Tracy Felty estimated about 100 people were injured. No one was believed to be missing.

The death toll here had been reported as high as 10, but that was the result of a misunderstanding, said Patti Thompson, spokeswoman for the Illinois Emergency Management Agency. “We were given some incorrect information,” she said. “Things are pretty hectic down there.”

Officials did not release names of the dead — four women and two men.

Estimates said that up to 300 homes and 25 businesses were damaged or destroyed. Southeastern Illinois College in Harrisburg announced it would be closed through the end of spring break, March 12, to deal with damage.

Back in Country Club Hills, a hard-hit area, Karen McClusky said she emerged from hiding in her bathtub to see if her house was still there; it was.

“I then went and checked on my neighbors and saw whole houses destroyed,” said McClusky, an eighth-grade social studies teacher who has lived in the neighborhood for 27 years.

As she spoke, the area already banged and buzzed with the sounds of workers wielding hammers and chain saws. Some residents walked the streets to stare, take pictures or share embraces.

The Red Cross set up a shelter for the displaced at the First Baptist Church in Harrisburg.

Police asked that sightseers stay away, and announced a 6 p.m. to 6 a.m. curfew in the stricken areas to prevent looting.

Hundreds of Ameren workers were converging from different areas to restore electricity. The utility said outages for more than 14,200 customers were whittled to about 3,300, with full service expected by Friday.

Illinois Gov. Pat Quinn toured the scene Wednesday afternoon and said he was declaring it a disaster area to provide eligibility for assistance.

Other serious damage was reported in that general area, including destruction of the St. Joseph Church in Ridgway, Ill.

The immediate St. Louis area experienced heavy winds that downed some power lines and broke some tree limbs on Wednesday morning, but no injuries were reported. DePaul Health Center in Bridgeton lost power and had to run on backup generators. The weather service reported the highest wind at 52 mph at 2:15 a.m. in the Harvester area of St. Charles County.

As the region’s damaged communities dug out, the Storm Prediction Center, in Norman, Okla., forecast another potentially damaging system Friday that meteorologist Ryan Jewell said would put the Midwest and South “right in the bull’s eye.”