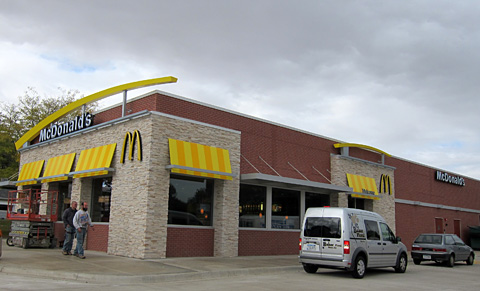 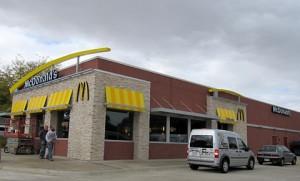 LOS ANGELES — McDonald’s now has its eye on the KFC customer, launching its new Chicken McBites in the U.S. on the same day that it announced record revenue of $27 billion for 2011.

The variation on popcorn chicken, featuring chicken breast and home-style seasoning, will complement the fast food giant’s existing poultry menu items such as the McNuggets and McChicken sandwiches.

The McBites will be available in 3-ounce snack, 5-ounce regular and 10-ounce sharable sizes through April 20.

The new offering is one of the many tactics McDonald’s is trying to stay ahead of what Chief Executive James A. Skinner called “significant headwinds” in the industry, including flat to slow growth, low consumer confidence and volatile commodity prices that are expected to rise as much as 5.5 percent in the U.S. this year.

“The global economy remains challenging with the recovery that’s predicted to be slow and prolonged,” he said in a conference call with analysts.

Still, the Oak Brook, Ill., behemoth said its global revenue was up 12 percent while income spiked 11 percent to $5.5 billion in 2011.

In the U.S., the company’s 4.8 percent increase in same-store sales was its best performance since 2006. The popularity of the 2-year-old breakfast Dollar Menu as well as the 40 percent of stores now open 24 hours a day helped draw customers, executives said.

The chain has been juggling a high-low strategy to retain old customers while attracting new ones.

Core, cheap menu items such as the Big Mac, hamburgers, cheeseburgers, McNuggets and fries account for about 30 percent of McDonald’s sales. But to draw more health-conscious consumers from fast-casual competitors, the burger giant is also flirting with the idea of adding more premium sandwiches to its U.S. rotation and is also pushing its commitment to fresh ingredients in an ad campaign.

Executives also said they plan to spend $2.9 billion opening 1,300 new restaurants and remodeling more than 2,400 around the world to help perk up the brand.

But investors can be a hard crowd to please. Worried that all that spending, as well as unfavorable exchange rates, high prices and rising taxes could eventually cut into McDonald’s profits, they sent the company’s stock down more than 2 percent to just under $99 Tuesday.