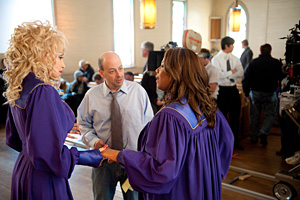 “Joyful Noise” is a sort of Wal-Mart movie, not exactly trendsetting but a decent enough offering for the heartland. The premise smacks of focus-group research more than inspiration, but it hits the target. Queen Latifah and Dolly Parton in a feel-good musical about a church choir — tell me how that could miss.

The singers play the rivalrous queen bees of a small-town Georgia church that never makes it beyond the semifinals in the national gospel competition. Latifah is the strict but kindly choir leader, a believer in tried-and-true spirituals. Parton is the church’s biggest donor, who thinks it’s time for some newfangled material.

Each character is allowed some humanizing flaws. Latifah is a bossy moral bulldozer and Parton is a tad vain. As she justifies it, “God didn’t make plastic surgeons so they could starve.” That line is the litmus test for the movie. If you laughed, you’ll have a good time.

Keke Palmer (“Akeelah and the Bee”) is Latifah’s gloriously voiced teen daughter and Jeremy Jordan is Parton’s grandson, a fish out of water imported from New York. Yes, they go for each other and, yes, they make beautiful music together.

The action of the film is like a big-budget episode of “American Idol” embellished with some comic and dramatic subplots. Latifah’s husband, unable to find work in their dying town, has re-upped in the Army, leaving her to work two jobs. Parton’s late husband (Kris Kristofferson) is much in her daydreams.

All that is upstaged, however, by roof-raising musical numbers from the cast and gospel greats (the film features the Holy Vision Church of Detroit Choir and Karen Peck). The soundtrack features an assortment of songs from Sly Stone to Usher, tweaked into gospel style with faith-based lyrics.

It’s nice to see Parton back in a film after a 20-year hiatus. Her voice is a great comic instrument. In her standoffs with Latifah she hits hilarious tones of incredulity, and she’s the good-humored butt of some jokes about elderly drivers.

The film is good-natured cornpone, insistently affirmative and uplifting, but not so pushy you feel that the emotions are being coerced. It should be a hit not because it’s knee-slap funny or novel but because simple, formulaic mass entertainment, when done with craft and integrity, can be rapturous fun.

Rating: PG-13 for some language, including a sexual reference