This news story was published on May 23, 2011.
Advertise on NIT • Subscribe to NIT

CLEAR LAKE – The Clear Lake Fishing Club hosted the 22nd Annual Walleye Classic Saturday and Sunday, May 21st and 22nd, 2011. The event was sponsored by Harley Davidson. One hundred teams consisting of two people each loaded up their boats each morning and started fishing at 7:00 a.m. Photo gallery and short video included.|

The Clear Lake Fishing Club hosted the 22nd Annual Walleye Classic Saturday and Sunday, May 21st and 22nd, 2011. The event was sponsored by Harley Davidson.

One hundred teams consisting of two people each loaded up their boats each morning and started fishing at 7:00 a.m. Their fishing day ended at 3:00 p.m.

Each day, a team would get a combined total of their catch. They could submit up to five walleyes each day. The walleyes had to be at least 14 inches and each team could have 2 that were over 22 inches. Sunday afternoon would be the final weigh in. The highest total for both days would be the winner. There was a guaranteed payout for first place of $2500. The first twenty-five places were in the money. The 21st to the 25th place would get a payout of $150. All other places would be figured out of a payback of 80% of all entry fees.

Bob Froiland, from Ventura, and teammate, Chris Gobeli, had their boat ready to go at 5:45 am Sunday morning. “I’ve been in this contest for ten years,” says Bob. They had a two day total of 4.92.

Team 12, Hill and Hill won the $500 with a Walleye weighing in at 7.58 pounds on Saturday. Tom Hill, from Belmond, caught the walleye. His wife, Chryl, was asked Sunday afternoon if she would be getting any of the $500 and she said, “No, it’ll all go towards another fishing trip.” The announcer asked what she got out of the deal and Chryl quickly replied, “I’ll get a week without him.” This gave the crowd a good laugh. Tom’s teammate was his son, Bob, from Lakeville, Minnesota. Chryl is the correct spelling of my name, “They made a mistake on my birth certificate, and it just stayed that way.”

Sunday’s Biggest Fish winner was Team 59, Kevan and Bryan Paul, with a walleye weighing 2.62. They took 19th place in the Classic.

Sunday’s weather, gusty winds, chance of thunderstorms and tornados in the forecast, had a great effect on the fisherman and women out in the boats. The boats were hard to control, hard to dock and hard to keep the water out of the boat. The results of the tournament were about an hour late, due to the contestants being told to dock anywhere, just make it in alive.

Team member of Team 55, Nichols and Nichols, was asked how the docking was, “Rough, very rough. The boat in front of us was sideways on the ramp. We asked the DNR what we should do. He told us to dock at McIntoch. The scariest part of the whole thing was getting my brother off the boat and on the dock.” His brother needed to get the fish in and weighed. “And I went to McIntoch.”

“Only 7/100’s difference between 2nd and 3rd Place,” said Dan Krauth of The Crazy Minnow Company. “The prizes for those Places hasn’t been figured out yet.” 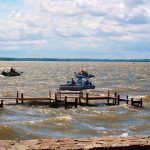 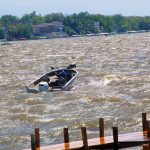 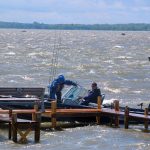 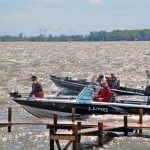 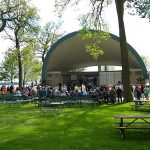 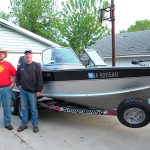 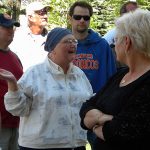 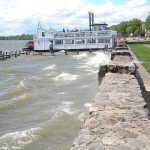 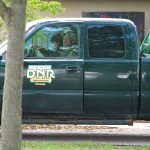 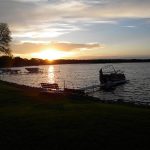 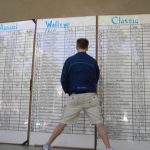 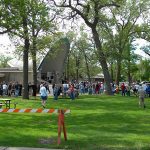 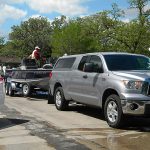 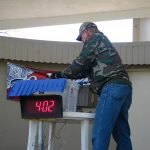