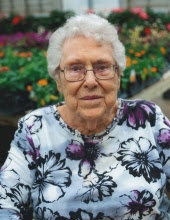 Marie Elizabeth Daley passed away on February 25, 2022. Marie was born in McGregor, Iowa on September 20, 1926 to Herman and Alice (Schneider) Coobs.

Marie graduated from McGregor High School in 1944. She attended the University of Dubuque one semester before transferring to the College of Nursing at the University of Iowa. She received her R.N. upon graduating from nursing school in January 1948.

She married Gerald (Jerry) Daley on October 11, 1947. She worked at the University Hospitals for two years and the Cresco Hospital until 1957 when Jerry and family moved to Charles City. She worked as a school nurse in Charles City from 1965 to 1985.

Marie’s hands were always busy with knitting or quilting beautiful creations, which were treasured by her friends and family. Not one to be idle, she was an avid gardener, candle maker, and cook. Her family could always count on having her potato salad, pink dip, pickles, and chocolate chip cookies whenever they visited. She also loved playing cards, fishing, reading, and enjoying a glass of wine at the end of the day. Marie was a big fan of the Hawkeyes and she and Jerry celebrated their wedding anniversary at the homecoming game every year for over 50 years.

In addition to her children, Pat Daley (Diane) of Coralville, Iowa, Michelle Johnson of Irvine, California, and Neal Daley (Nancy) of Waukon, Iowa, she is survived by her grandchildren Nicole, Kelly, Noah and Erin and six great grandchildren.
Marie was preceded by Gerald (husband of 63 years), her brother Robert, and sisters, Eleanor and Alice.

A Celebration of Life will be held at 2:00 pm on Saturday, March 19 at the First Congregational United Church of Christ in Charles City. In lieu of flowers, please make donations to the Floyd County Cancer Friends in care of First Citizens Bank.