This news story was published on October 18, 2021.
Advertise on NIT • Subscribe to NIT

WEBSTER CITY – An Iowa man was quickly nabbed by cops after the armed robbery of a Webster City McDonald’s.

On Saturday October 16, 2021 at around 1915 hours Webster City Police Officers were dispatched to the McDonald’s restaurant located at 400 Fair Meadow Drive for a report of an armed robbery that had just occurred. The reporting party indicated a male had entered the restaurant, stated he had a firearm and demanded money from the drawer. The male fled from the restaurant with an undisclosed amount of money.
Officers responded to the restaurant and quickly identified the male based on video surveillance and statements from witnesses. The male was identified as Albert Lee Carr. Carr was found at the Stone Ridge Apartments located at 305 Fair Meadow Drive and taken into custody.

Albert Lee Car (40) was charged with Robbery in the Second Degree, a Class C Felony and Assault on a Peace Officer, a Class D Felony.

The investigation is ongoing and additional charges are expected. 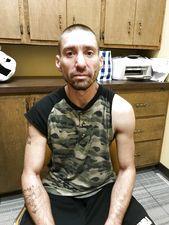