This news story was published on December 20, 2020.
Advertise on NIT • Subscribe to NIT

Iowa’s Luka Garza led all scorers with 30 points, marking the 12th time in 13 games the All-American topped 20 points against an AP Top 25 opponent, dating back to last season. Garza eclipsed 30 points for the fourth time of seven games this season and ninth time in his career. Garza also snagged a team-best 10 rebounds for his fourth double-double of the season.

Luka Garza (30) and Joe Wieskamp (20) combined for 50 of Iowa’s 88 points. Wieskamp’s 20 points and nine rebounds both equaled season bests for the junior. Sophomore Joe Toussaint tallied 12 of his season-high 14 points in the second half.

Gonzaga built a 20-point lead in the second half after leading by 14 at the break.

The Hawkeyes will return home to host Purdue in Iowa’s conference opener on Tuesday. Tipoff is scheduled for 8 p.m. (CT) on Mediacom Court at Carver-Hawkeye Arena. 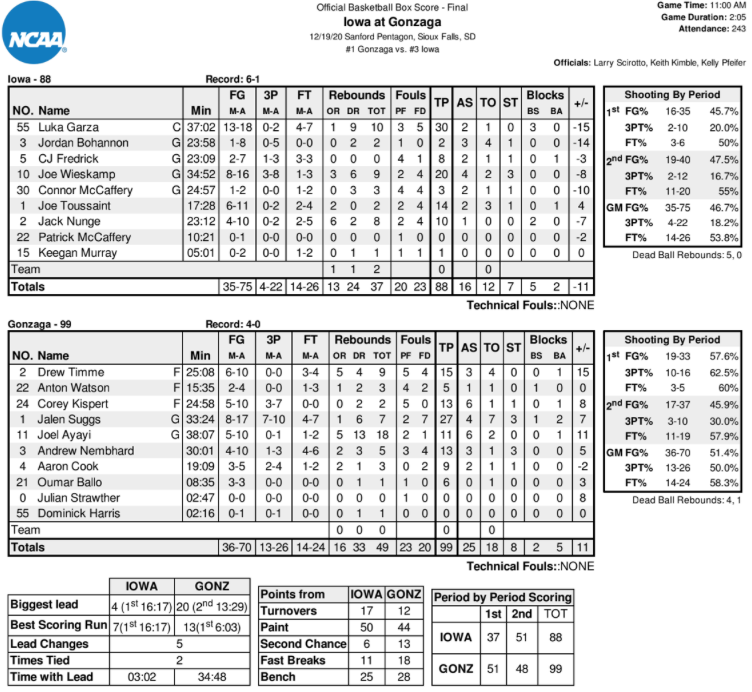