The Cyclones raced out to a fast start in Iowa City, with the offense clicking from the opening tip. Three of Iowa State’s first four field goals came from beyond the 3-point line, the last of which was a triple by Ashley Joens that sparked a 10-1 Cyclone run. Senior Kristin Scott converted an and-one to cap the run and give ISU an 18-8 lead with 4:18 to play in the first. The Cyclones would hold a 26-20 advantage after 10 minutes of play thanks to an Emily Ryan layup in the closing seconds of the quarter.

Another Iowa State run helped to continue the Cyclone momentum early in the second quarter. ISU scored 10-straight to go ahead 36-22, highlighted by triples from Lexi Donarski and Scott, with 7:47 to play in the half. Ashley Joens took over from that point forward, scoring 11 of Iowa State’s final 13 points to maintain a 49-35 lead at the intermission. It capped a phenomenal 20-point half from the star junior, followed by nine points from Donarski. Iowa State shot 48.6 percent (18-of-37)) from the field, including a blistering 10-of-21 from 3-point range, in the first half.

ISU’s long-distance shooting cooled after the intermission, making just 1-of-7 3-point attempts in the third quarter, but the Cyclones were able to make up for it on the defensive end. Iowa State forced seven turnovers in the third quarter, and held the Hawkeyes to just nine field goal attempts in the 10 minutes after halftime. ISU scored the last four points of the third to take a 73-56 lead with one quarter to play.

The Hawkeyes flipped the momentum in a hurry in the final stanza. Iowa ran off a 17-0 run in just over five minutes of game time to erase ISU’s lead. Iowa made five 3-pointers during the run, the last of which was a triple by Kate Martin to tie the game at 75-75 with 3:37 to play. Ashley Joens temporarily regained ISU’s lead with a trey, but it would not be enough the stem the Iowa tide. Caitlin Clark made a 3-pointer with 22 seconds left on the clock, and the Hawkeyes would hang on to win, 82-80.

The Hawkeyes expanded their home-winning streak to 38 consecutive wins, ranking second in the country behind Baylor (57).

Players of Note
Ashley Joens showed once again why she is the nation’s leading scorer. The junior tallied her fourth 30-point effort in five games, ending the night with 35 points on 12-of-25 shooting, including 5-of-11 from 3-point range. She added 13 rebounds and 2 steals.

Lexi Donarski was one of three Cyclones in double figures, scoring 12 points on 4-of-8 shooting. The freshman made 3-of-5 attempts from 3-point range and tallied three rebounds and two assists in 25 minutes of action.

Iowa heads to East Lansing, Mich., to take on Michigan State on Saturday, Dec. 12. Tip-off is set for noon (CT), and the game will stream live on BTN+.

The Cyclones return home to take on North Dakota State on Saturday at noon at Hilton Coliseum. The game will be broadcast live by Big 12 Now on ESPN+. 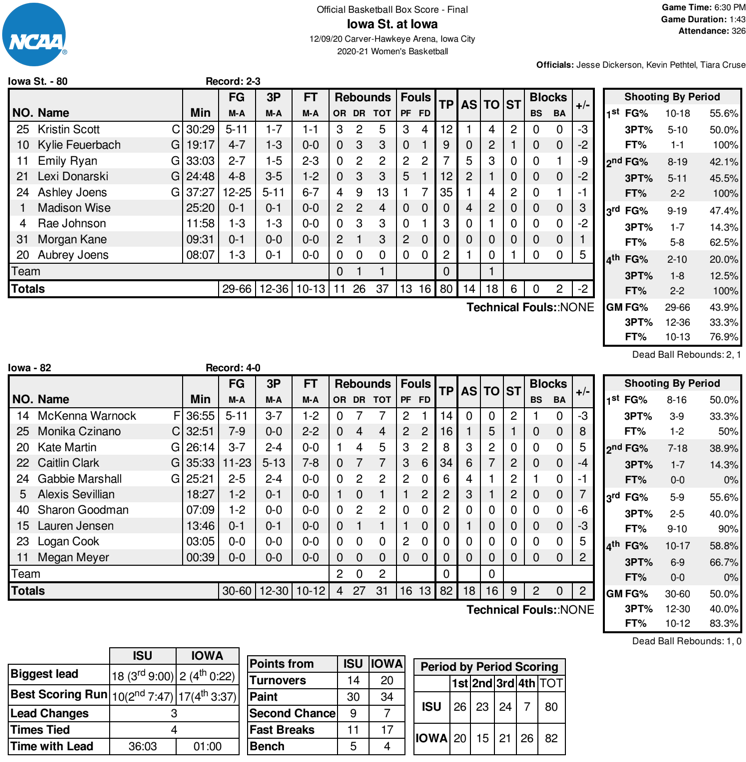