RURAL MANLY, IOWA – A Mason City man is facing a drug charge after a recent arrest in Worth county.

On January 7, 2019 at 12:53 AM, a Worth County Deputy conducted a traffic stop on a vehicle on Highway 65 south of Manly. The deputy observed an odor of an alcoholic beverage coming from inside the vehicle. The driver identified as 31-year-old Eric Todd Nelson of Mason City was arrested for Driving While Suspended. A search of the vehicle was conducted. Nelson was transported to the Worth County Jail. At the Jail, standardized field sobriety testing was administered. Nelson was booked in and charged with possession of a controlled substance (cannabidiol) 2nd offense – a serious misdemeanor; Open Container – a simple misdemeanor; and Driving While Suspended – a simple misdemeanor.

Court records indicate Nelson – a convicted burglary who has spent time in Iowa prisons – was caught with marijuana in 2017 in Cerro Gordo county and was guilty of that crime. He was jailed and fined, but still owes the entire $852.25 in fines and fees to Iowa courts.

The charge of Operating While under the Influence is pending lab results. 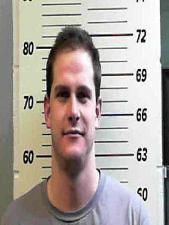