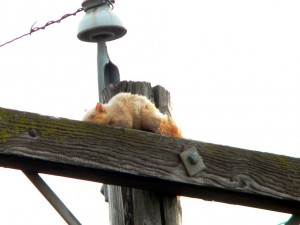 MASON CITY – The Iowa DNR reminds today that squirrel season begins September 2 and there are no restrictions on shooting hours.

Squirrel hunters should expect to find an average to above average squirrel population over most of the state, with higher squirrel numbers in areas with quality oak and hickory trees. Squirrel season opens Sept. 2.

Fox squirrels can be found anywhere there are a few acres of trees, but gray squirrels are generally limited to the heavily forested areas in eastern and southern Iowa.

Hunting opportunities for squirrels are excellent because competition is low and hunters could have the area all to themselves. Because of the lack of competition, squirrel hunting is a good way to introduce novice hunters and youth to the outdoors. It also benefits experienced hunters by honing their skills before other seasons open.

“If you spook a squirrel or mess up something, there’s probably another squirrel over the next hill. Young hunters can learn and fail which is how many of us learned our woodsmanship skills – without the pressure of a short season or competition from other hunters,” said Jim Coffey, forest wildlife research biologist with the Iowa Department of Natural Resources. “We need to rejuvenate the fall ritual of going squirrel hunting. It’s fun and takes a lot of skill to outwit a squirrel.”

Squirrel hunting is done by either sitting-and-waiting, or by still-hunting.

The sit-and-wait technique is similar to turkey hunting. Hunters will sit near likely feeding areas, such as beneath oak, walnut, or hickory trees or along corn-forest edges and many will call them. Plan to wear plenty of camouflage and consider a face net to avoid bugs.

The still-hunting technique is employed by slowly walking through forested areas and stopping frequently to watch for feeding squirrels, then sneaking up on them.

The best hunting times usually are during the morning and afternoon feeding hours.

Squirrel season runs through January 31, 2018. The daily bag limit is 6 (fox and gray squirrels combined) and the possession limit is 12. There are no restrictions on shooting hours.