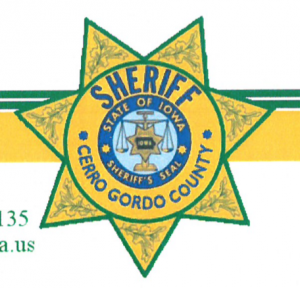 RURAL MASON CITY – A driver allegedly blew through a stop sign Friday night, into the path of a woman with a baby in her pickup truck, causing a serious auto accident.

The accident took place at about 8:50 PM, Friday night, August 26 near 305th Street (county road B20) and Spruce Avenue. Cerro Gordo county deputies responded to a two vehicle collision with injuries at this intersection.

According to the sheriff’s office, John Robert Poulin, age 26 of Plymouth, was driving a 2000 GMC Yukon southbound on Spruce Avenue, when he failed to stop at a stop sign and pulled into the path of a 2011 Chevrolet Silverado, driven by Abby Margaret Pope, age 37 of Rock Falls. Pope was eastbound when her Silverado struck Poulin’s Yukon broadside, and both vehicles went into the Southeast ditch and field.

As a result of the collision, Poulin was injured and was taken to Mercy Medical Center North Iowa by private vehicle. Pope received injuries from the accident and was transported to Mercy Hospital by Mason City Fire Medics. The passenger in Poulin’s Yukon, Rusty Lee Levenhagen, age 25 of Mason City, also was transported by Mason City Fire Medics for injuries. A 2-month-old baby from Pope’s vehicle was taken to Mercy for evaluation but was not injured.

The injuries sustained by Pope, Poulin, and Levenhagen did not appear to be severe. Poulin was cited for fail to obey a stop sign. Both vehicles appear to be a total loss.