Foster grandparent sentenced to 50 years in prison for child molestation

This news story was published on July 28, 2015.
Advertise on NIT • Subscribe to NIT

CHARLES CITY – A Floyd man who served as a foster grandparent and who was later found guilty by a jury of sexual abuse of a child has been sent to prison for decades.

According to court documents, John W. Lusk, age 74, was accused twice of fondling two different 8-year-old children in Floyd county. The first alleged molestation (felony charge) took place in 2010 when the child was visiting Lusk at his home in Floyd. The child was trying to sleep when Lusk allegedly rubbed the child’s groin area. The second incident (aggravated misdemeanor charge) took place in 2014 in Charles City. He allegedly rubbed a second child’s groin area when the child and the child’s family were visiting him after a medical procedure.

On June 6, 2014, the Floyd County Sheriff’s Office filed the two charges and a warrant for Lusk’s arrest was issued. He was jailed and appeared in court on June 11, 2014. He pled not guilty on June 30, 2014 and was set for trial soon thereafter, but a number of continuances has delayed his trial. He finally faced a jury on May 5 and was found guilty of two counts of sexual abuse of a child.

Lusk was sentenced on July 27 to two consecutive 25 year sentences for his crimes. He must serve at least seven-tenths of his sentence. He was reportedly a volunteer “foster grandparent” who spent time with children in various settings.

Lusk’s legal woes are not over, however. He is also charged in Woodbury county, Iowa with three counts of second degree sexual abuse. The alleged crimes took place twice in 2007 and once in 2005 against a female child under the age of 12 who was visiting Lusk’s home in Woodbury county. Lusk has pleaded not guilty, and continuances filed by his attorney have also pushed that trial back. Online records do not indicate when his trial date will be held on this charges. 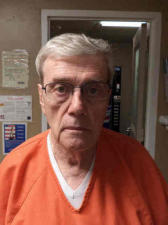