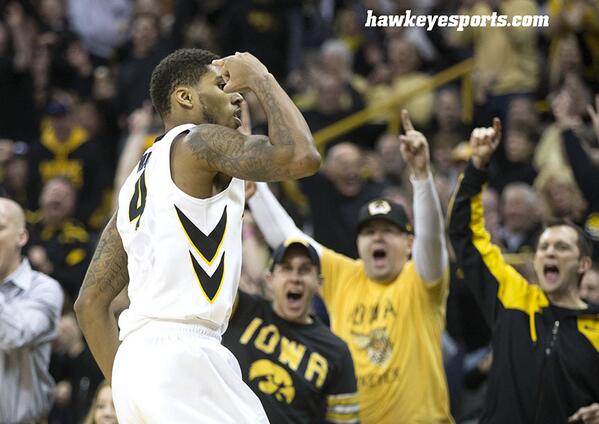 IOWA CITY – Iowa has a new winning streak started at Carver-Hawkeye Arena, and the Michigan Wolverines were the victims.

After losing its previous two home games following 20-straight victories, Iowa won in resounding fashion Saturday over a top ten Michigan Wolverine team, 85-67. The 18-point victory was also Iowa’s largest vs. an AP Top 10 team since beating No. 2 Missouri by 18 on Dec 15, 2001.

Iowa looked focused and poised in the game. Many of the Hawkeyes played with an energy and enthusiasm that seemed to lack in the last two losses. Michigan was out-of-sorts from the tip, quickly falling behind and never threatening to take a lead after the first few minutes.

Asked if his team was desperate after losing its last two home games, Iowa coach Fran McCaffery said “I thought they had great focus. In no way, shape or form is there anything close to desperation.”

The Hawkeyes are now 6-0 in games following a loss this season. They are averaging 86.5 points in those games. Iowa has now beaten multiple AP Top 10 Big Ten teams in the regular season for the first time since 1990-91.

Roy Devyn Marble led Iowa with 26 points, 22 coming in the first half. He moved to No. 10 on Iowa’s all-time scoring list (1,529 points). He moves past Greg Brunner, Don Nelson, and Andre Woolridge.

“That was a Player of the Year candidate performance. Iowa is blessed to have a player like him. He is tremendous,”  Michigan coach John Beilein said after the game.

Iowa has registered 20+ assists in seven games this season. The Hawkeyes had only 7 turnovers in the game.

#Hawkeyes Devyn Marble celebrates after draining a 3 during their game against Michigan. Iowa leads 43-29 at the half pic.twitter.com/EAQfIWIhmw