This news story was published on February 12, 2013.
Advertise on NIT • Subscribe to NIT 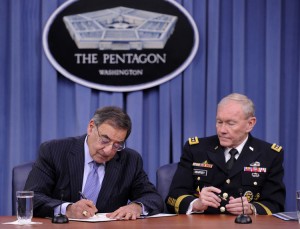 When the military’s “don’t ask, don’t tell” policy on sexual orientation was repealed 17 months ago, “I committed to reviewing benefits that had not previously been available to same-sex partners based on existing law and policy,” Panetta said in the memo. “It is a matter of fundamental equity that we provide similar benefits to all of those men and women in uniform who serve their country.”

“Today, I am pleased to announce that after a thorough and deliberate review, the department will extend additional benefits to same-sex partners of service members,” the memo said.

Taking care of service members and their families are “two core values” of the United States, said Panetta, who announced he was stepping down as Pentagon chief earlier this year.

“Extending these benefits is an appropriate next step under current law to ensure that all service members receive equal support for what they do to protect this nation,” he said.

But, “it is my expectation that these benefits will be made available as expeditiously as possible,” the outgoing secretary said.

He noted the federal Defense of Marriage Act blocks the department from enacting some benefits — identified by the Post as including health and dental insurance and death benefits — now available to heterosexual military spouses and their children. The U.S. Supreme Court has agreed to review DOMA.

“While it [the law] will not change during my tenure as secretary of defense, I foresee a time when the law will allow the department to grant full benefits to service members and their dependents, irrespective of sexual orientation,” Panetta said. “Until then, the department will continue to comply with current law while doing all we can to take care of all soldiers, sailors, airmen, Marines and their families.”