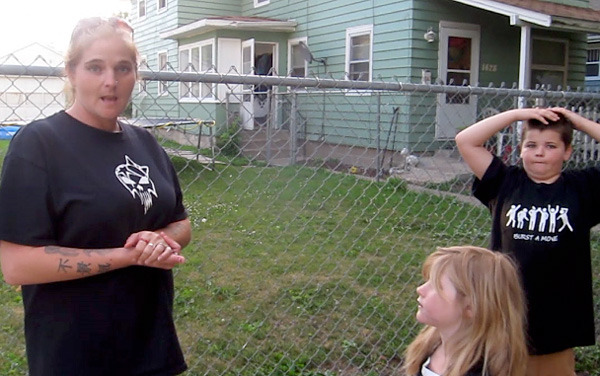 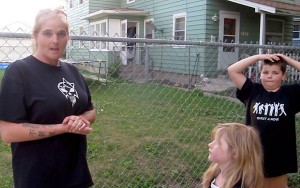 MASON CITY – Sharrie Marvin of Mason City and her boyfriend, John Debates, are the owners of four pit bulls that face an uncertain future.

Last Friday evening, June 8th, a pedestrian with a small dog was walking past their home at 1428 North Monroe Avenue when Marvin claims that dog went under the fence at the front of her property and entered her yard.  Marvin’s four pit bulls were in the back yard, she says, and her dogs chased the small dog back under the fence onto the sidewalk, where the dog was injured with what she says was at least one bite and a scratch.

(PHOTO: Sharrie Marvin’s two children look on as she explains an incident involving her four pit bull dogs and another dog she claims entered her yard.)

The pedestrian called Mason City police, who responded, and took all four pit bull dogs to the Humane Society.  Marvin was given a total of twelve citations that day (three for each dog).  She admits the dogs were not registered and were not properly vaccinated.  The police report does not give details of the incident. 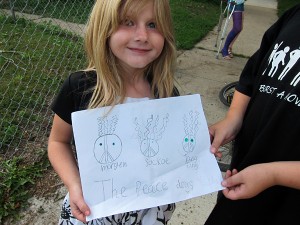 Marvin and Debates, together 13 years with two children, are not happy about how this incident played out, they said, during an interview.  They asked NIT to help them tell their side of the story.

(PHOTO: Sharrie Marvin’s daughter, Cadence, 8, holds a drawing she made of her four dogs that were taken by police.)

The couple made several accusations during a video interview (see below).  They claim that  the responding officer told them that they would “get so many tickets they would never get their dogs back.”  Marvin says that the responding officer only took the word of the owner of the small dog about how the incident took place, and did not believe her when she told him the small dog entered her yard.  “The first officer on scene… didn’t want to hear my story,” she said.

They also claim that because the other dog entered their property, their dogs were not to blame for protecting their home.  Since the incident on Friday, they further claim that the MCPD has been harassing them.

Asked about the harassment allegations that Marvin and Debates spoke of, Lashbrook said that “we have a process for filing a complaint.  We would ask that they come to us so we can look into it.” 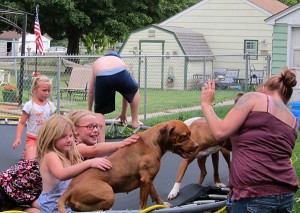 Marvin’s four dogs were supposed to be in custody at the Humane Society until Monday, June 18th, but Marvin got a call on Wednesday that said she could pick them up Thursday.  She paid $560 for Humane Society fees, to license the dogs and to have all required vaccinations completed and then brought the dogs home.

(PHOTO: Two pit bulls frolic with children on a trampoline at their home on Thursday evening.)

Later Thursday, the same Mason City police officer that responded to the incident Friday came to Marvin’s door and handed her four new citations for vicious dogs- one apiece.  The court date is set for June 25th.

Marvin says she has witnesses writing accounts of what happened between the dogs that support her claims and she plans on presenting that information in court.  Marvin says that the woman walking the small dog had no leash on her dog when it went under her fence, and was walking a stroller and had two young children with her.  Marvin says the woman slipped the leash onto the dog’s collar as the two women were checking the dog over for injuries.

If the judge upholds the vicious dog citations, it would be up to the city to decide if the animals are “vicious animals.”  According to Mason City code, “it shall be unlawful to own, keep, shelter, or harbor any animal that meets the definition of ‘dangerous or vicious animal'” and goes on to say that “such animal shall be destroyed in a humane manner.”

Former Mason City Councilman Don Nelson said typically an animal “gets two chances” before it is deemed vicious and then euthanized.  Another former Councilman, Max Weaver, said that the process is “political” and says it is not common for the city to deem an animal vicious.  “I’ve only seen it three or four times, ever,” Weaver said.

At this time, all four dogs are home, and Marvin and Debates and their children are happy to have them back.

Marvin says she is looking for new homes for at least a couple of the dogs.