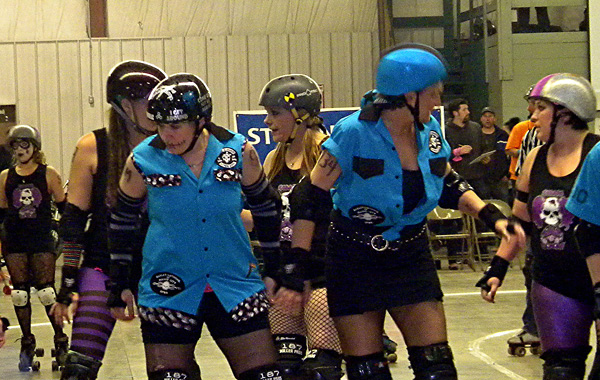 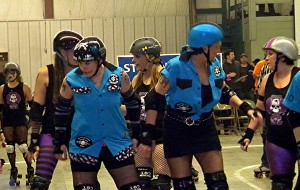 MASON CITY – Saturday, April 7th, the Mason City Dames of Anarchy took on the Newton Rollin Rebels in a home bout of roller derby at the North Iowa Fairgrounds in the All Season’s Building.

At halftime, with the score of 69-28 and the ending score of 141-95, it seems like it was an easy win for the Dames of Anarchy. Getting to that score wasn’t that easy.

Both teams took hard hits. Many bodies hit the floor, some slower than others getting up, but all got up. The Rebels started to inch closer, but the Dames fought back and won by 46 points.

SagitTearitup says good-bye to North Iowa. She moved to Minnesota and is now trying out for a Roller Derby Team up there.

In the final two laps of the Bout, Cruella DuVall was raising her arms getting the crowd jumping and clapping in celebration of the victory.

A portion of the Derby’s proceeds went to the North Iowa Humane Society. Executive Director Sybil Soukup and other NIHS employee’s were at the Bout with some adoptable animals, showing the people how loving and needed the these animals are. Tracy Hamand, Shelter Manager, even had an albino Ferret walking around through the crowd.

The Master of Ceremony was Joe Malone, the Sound was provided by Dennis Higgins, and the Willow of Mason City provided the after Derby Party.

The Dames next home Bout will be May 26. For more information go to their website or Facebook “River City Dames of Anarchy.”