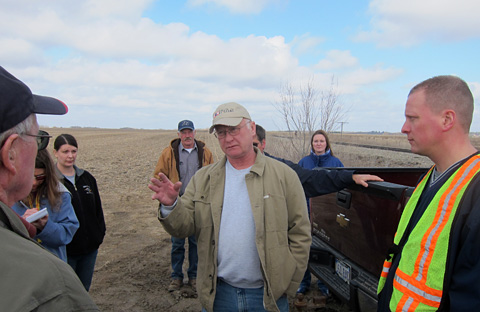 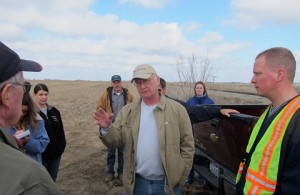 NORA SPRINGS – In the face of strong public opposition, the Floyd County Board of Adjustment approved a conditional use permit for Archer Daniels Midland Company (ADM) today.

The board held a public hearing at 1:30 p.m. at the site of the plant’s proposed location on 180th Street, about 1.2 miles east of Zinnia Avenue, directly south of Nora Springs.  The public was allowed to attend and address the board there, and representatives of ADM were present as well.    The board wanted to get a better idea of the project and ask questions of Floyd County Engineer Dustin Rolando.

At the site, 180th Street was difficult to maneuver.  It was mostly mud and ruts.  Rolando told the board that rock is on the way to improve the road conditions and that it had just been grated Friday.  Combined with weekend rain, the road was in worse condition than normal.  Neighbors opposed to the project cited the sub-standard condition of the road and the cost to replace it as one of their reasons against the project, as well as loss of property value, dust from the gravel, and safety issues.  A daycare is located very close to the site.  It was said one semi-truck would traverse the road every 3 minutes. 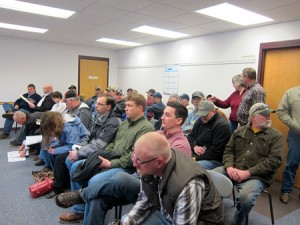 The board then re-convened in Nora Springs at Town Hall, and it was standing room only.  A lengthy public input session was held.  Mason City attorney David Grooters presented a case, representing several nearby property owners who oppose the project.  He called for the board to slow down, gather more information on the impact the project will have on the county, and to conduct a feasibility study to help evaluate that information.

The board did not agree to require a feasibility study, but did make the paving of 180th Street from the plant’s driveway to Zinnia Avenue one of its conditions in approving the project.  That will cost roughly a million dollars.  They said it would be up to the Floyd County Supervisors to determine who would pay for that.  The other conditions the board set were to work out any issues with a neighbor’s water line that runs under 180th Street and to erect trees or other foilage just west of train tracks that are on the east side of the plant’s proposed location.  This addresses another neighbor’s concern about sound and aesthetics.

The project next goes before the Floyd County Supervisors to determine how to pay for the paving of 180th Street.  For more information on the project, read yesterday’s story.