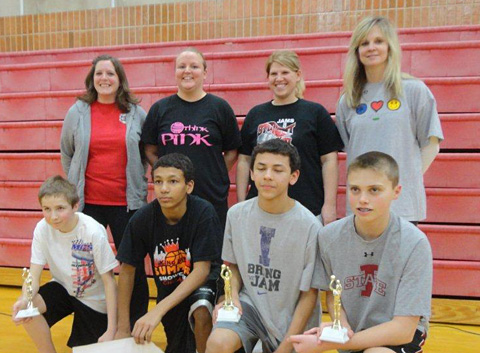 The father-daughter team won a sudden-death shootout against Ashley Alert and her dad, Kevin, to win the championship.

In the boys bracket, Jareese Williams Jr. and his mom, Jamie, edged out Tony Hernandez and teammate Bethany Gabe, a math teacher at John Adams Middle School. Finishing third was Ben Butler and mom Jolene, and third was Lucas Jacobson and his mom, Tiffany.

Third- and fourth-place finishers in the girls competition were Kaylee Anderson and her dad, Jon, and Hannah McLaughlin and her dad, Michael.

Thursday’s event completed the second evening of competition in the 27th annual shootout. Each team shot 20 free throws — 10 by the student, 10 by the parent — with the team making the most advancing to the next round. To read about Tuesday’s competition, click here http://www.northiowatoday.com/?p=11301. 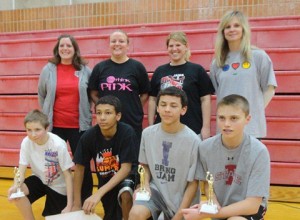 BELOW: Tiffany Jacobson lines up a shot during the Mother-Son Shootout free-throw shooting contest Thursday evening at Mohawk Gym. Jacobson and her son, Lucas, took fourth place in the contest. 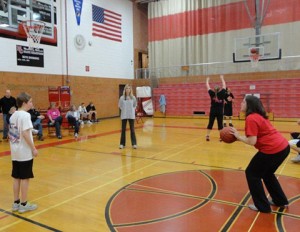