Analysis: Killing of Afghan civilians is blow to Obama hopes for easy exit 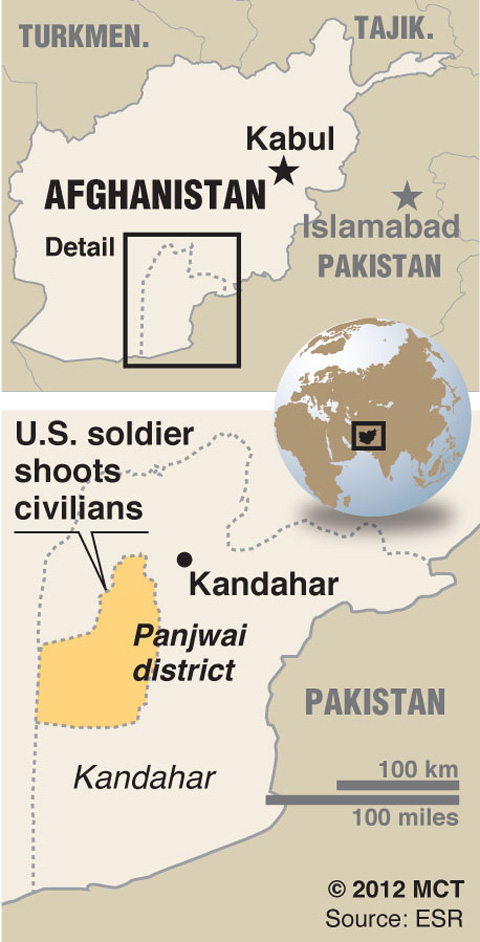 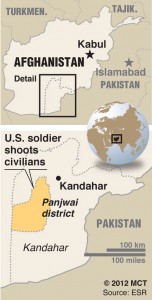 WASHINGTON — The killing of 16 civilians in Afghanistan, allegedly by a lone U.S. serviceman, is one more blow to President Barack Obama’s hopes for an easy exit from a 10-year-old war and deepens doubts about U.S. plans to assign advisers to Afghan forces.

The gruesome predawn attack showed how horrific and unforeseen events in Afghanistan, not timetables and plans at the White House and Pentagon, are setting the end game for America’s involvement in a deeply unpopular war.

Washington had hoped for a carefully managed withdrawal starting this year, with 20,000 U.S. troops due home by September. Obama administration officials also are seeking a long-term security agreement with Afghan President Hamid Karzai in an effort to keep the Taliban insurgency at bay after the remaining U.S. and allied combat troops depart by the end of 2014.

In public, administration officials insisted that the mass slaying would not derail their plans or force them to reassess the withdrawal.

“This tragic incident does not reflect the commitment of the U.S. military to protect the Afghan people and help build a strong and stable Afghanistan,” Defense Secretary Leon E. Panetta said in a statement. He added that he told Karzai in a telephone call Sunday that he remains “fully committed to ensuring that our cooperation continues.”

But a series of setbacks have upset U.S. plans in recent months, and intensifies doubts in the White House about whether it is possible to salvage an outcome in Afghanistan that looks anything like the victory that Obama once promised.

The latest attack only makes the situation more difficult for Obama.

If he speeds up plans to withdraw U.S. troops, as polls show many Americans would like, he risks seeing the collapse of Afghan security forces, which are plagued by training problems and drug abuse. But slowing down the U.S. pullout would make it harder in an election year, when his Republican rivals have sharply criticized his foreign policy record, to argue that he is achieving sufficient progress in Afghanistan.

A classified U.S. intelligence report based on interviews with captured Taliban insurgents concluded in January that the Taliban is biding its time until the U.S. and its allies withdraw. The report was leaked to the media last month.

“Once ISAF is no longer a factor, Taliban consider their victory inevitable,” the report says, referring to NATO’s International Security Assistance Force. “The Taliban are absolutely confident in their ability to subdue Afghan forces.”

The attack Sunday also raises questions about the administration’s plan to begin a shift from leading the combat to an advisory mission this year. The plan calls for assigning small teams of U.S. troops to work directly with Afghan units. But that may make them more vulnerable to the kind of deadly reprisals that have grown increasingly common.

The administration had hoped to use a NATO summit in Chicago in May to promote its strategic agreement with Karzai’s government and the shift to an advisory role. The high-profile meeting is now likely to focus, in part, on problems.

Michael O’Hanlon, director of research in foreign policy at the Brookings Institution in Washington, said the shooting will make it more difficult to negotiate a long-term partnership with Afghanistan.

“These things have enduring significance,” he said.

Obama was told of the mass slaying and briefed by his national security aides early Sunday. He phoned Karzai from his motorcade at midday as he headed out to watch his daughter, Sasha, play basketball.

The president expressed his “shock and sadness” to Karzai and promised to “hold fully accountable anyone responsible,” according to a White House summary of the call.

For now, the slayings seemed all but certain to ignite a new spasm of anti-American violence only days after the administration reached a deal with Karzai to turn over a prison north of Kabul to Afghan control within six months.

Karzai had demanded to take over the U.S.-run detention facility after U.S. guards burned bags of Muslim holy books in what the Pentagon later described as an accident. That sparked riots that left at least 30 Afghans dead, and the killing of six U.S. service members by Afghan troops.

“I suspect the White House is getting very frustrated,” said Stephen Biddle, senior fellow for defense policy at the Council on Foreign Relations in Washington. “They’re trying to do a reasonable, slow withdrawal, and they keep getting wrenches thrown into the works that create these problems and political difficulties.”