AMES – Jaren Holmes scored 23 points, including 18 in the second half, to lead No. 12 Iowa State to an 80-76 win over No. 5 Kansas State Tuesday evening at Hilton Coliseum.

The win marked Iowa State’s fifth Top 25 victory of the season and moved the Cyclones back into a tie for first place in the Big 12 standings with Texas and K-State, both of which the Cyclones have defeated this season.


Iowa State trailed 33-31 at the half after Kansas State connected on six of its last nine field goal attempts and held the Cyclones scoreless over the final 2:38 of the half.

The Cyclones, namely Holmes, came out hot in the second half. A 10-1 run by Holmes put the Cyclones up 47-41 with 14:30 left and ISU ended up extending its lead to 10 points with just more than 8:00 minutes remaining.

K-State didn’t go away quietly, slowing chipping away at the lead and cutting the lead to one with 5:43 left. The game stayed close until Gabe Kalscheur hit a jumper with 0:45 seconds left to extend the Cyclone lead to 75-71. ISU connected on all four free throws down the stretch to secure head T.J. Otzelberger’s 10th career victory over an Associated Press Top-25 team as head coach of the Cyclones.

Top Performers
Holmes connected on 6-of-7 shots in the second half to match his Cyclone high of 23 points. He finished 8-of-11 from the field, 2-of-3 behind the arc and 5-of-6 at the line, while also dishing out seven assists with just one turnover.

Kalscheur chipped in 19 points, Osun Osunniyi had 16 and Tamin Lipsey rounded out the double-figure scorers with 10 points to go along with six boards, four assists and three steals.

Notes
-Iowa State trailed at the half (33-31) at Hilton Coliseum for the first time this season … the Cyclones are now 2-3 when trailing at the half this season.
-Gabe Kalscheur reached double figures for the sixth-straight game … it is the longest streak of his career.
-ISU improved to 4-0 this season when Holmes scores 20 points.
-First win over an AP Top 5 team at home since beating No. 5 Kansas 77-60 on Jan. 5, 2019.
-T.J. Otzelberger becomes the fifth coach in school history with double-digit victories over AP Top 25 teams.
-Otzelberger moves into a tie for fourth in school history with his fourth win over an AP Top 10 team.

Next Up
Iowa State travels to Missouri Saturday for the SEC/Big 12 Challenge. Tipoff is scheduled for 1 p.m. on ESPN2. 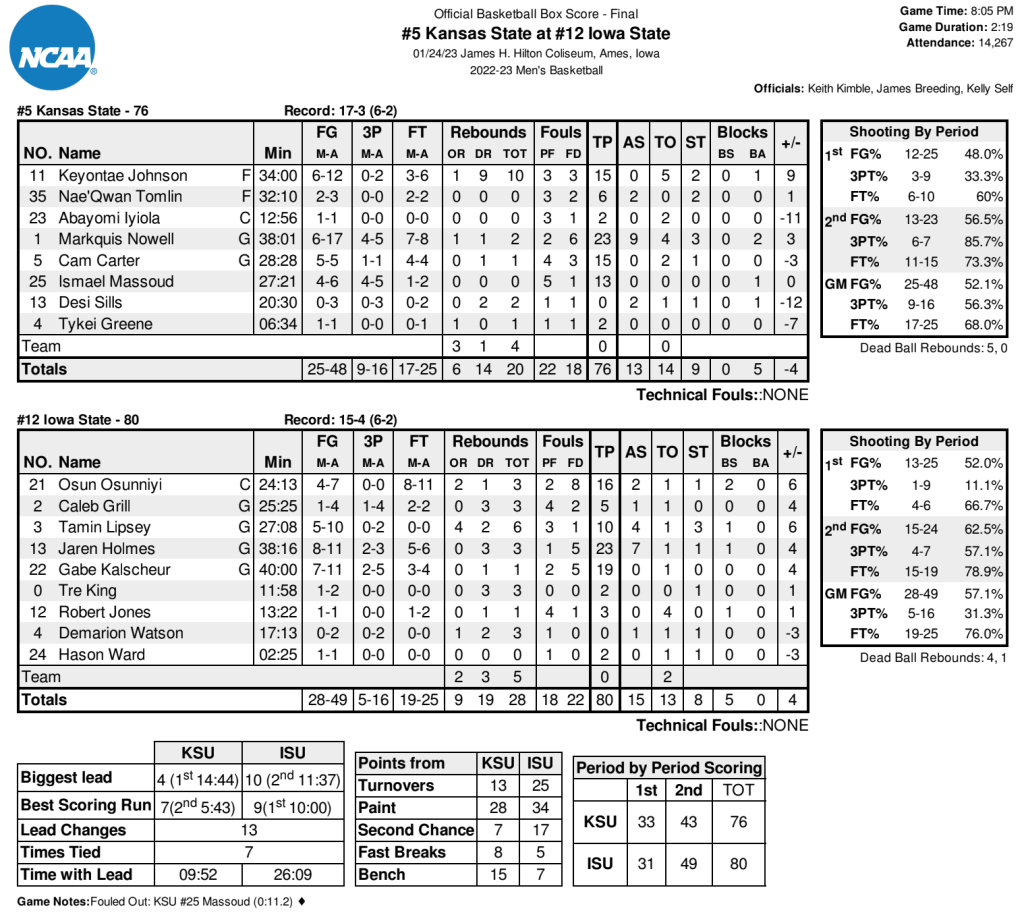