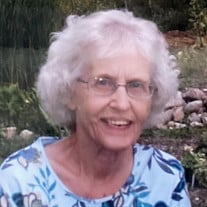 A funeral will be held on Thursday, Sept. 23, 2021, at 11 a.m., also at Ward-Van Slyke Colonial Chapel, followed by internment at Clear Lake Cemetery.

Just 11 days shy of age 89, Joan led a wonderful, active life and didn’t pass from the cancer she so valiantly fought a decade earlier. Joan was born on Sept. 28, 1932 to Clarence and Mary (Thompsen) Christianson in Estherville, IA, where she attended country school. She graduated from Graettinger High School in 1950 and Hamilton Business College in Mason City, IA in 1951. She worked as a secretary at various businesses in Mason City and Clear Lake, including Henkel Construction Co., Custom Farm Services and Handicap Village (now One Vision).

She married Wallace Johnson in 1956, where they made their home in rural Clear Lake. Together, they had three children, Randy, Julie and Jacqueline.
As an active member in Zion Lutheran Church, she taught Sunday school, lead bible studies, served on church council and brought home communion to shut-ins. She also served as a hospice volunteer.

She married Bill Otterman on April 5, 1997. Together, they wintered in Phoenix and enjoyed dancing, sightseeing and visiting their families. Joan, a voracious reader, also solved daily crossword puzzles and enjoyed walking, where she was known to walk at a brisk pace. She traveled to Norway, Hawaii, The Holy Land and Denmark. She enjoyed cheering on basketball teams, first the Iowa Hawkeyes and other professional teams; then supported the Iowa State Cyclones, where two of her granddaughters attended college.

In 2010, she received devastating news of tongue cancer. After a long year of cancer treatments at Mayo Clinic, she was considered cured. Although she could no longer eat, she relied on a feeding tube for sustenance. With her strong Christian faith and the power of prayer, she lived her last 10 years cancer-free.

She was preceded in death by her parents, brother Charles Christianson, brother-in-law Harold Sampson and sister-in-law, Joan Linkletter.