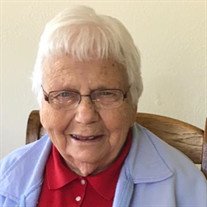 June was born June 7, 1923, the daughter of Paul and Alta (Nielsen) Matzen and grew up on a farm outside of Mason City. She attended country school through 8th grade and graduated from Mason City High School in 1941.

June always managed to bring in extra income in addition to raising five children. She baked pies, clerked at a grocery store and published an ad sheet for Ventura merchants, but in 1968 began a 30 year career as a Ventura High School cook. She enjoyed her coworkers, teachers, administrators, support staff and the students she came to know. She could tell you if they were “good eaters” or polite. She also enjoyed playing cards; especially bridge, and met many good friends over a card table. Earlier in life she enjoyed golf, snowmobiling, bowling and always dancing.

June and Keith were fortunate to travel to Hawaii, several Caribbean Islands and toured parts of Europe on a bus trip following the Al Pierson’s Band as they played at locations in Germany, Austria and Italy.

She was preceded in death by her parents, husband, sons, Gary and Doug; and siblings, Marjorie Walls and Paul Matzen Jr.