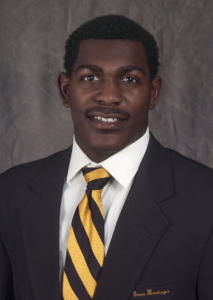 Highlighted by King, last year’s Thorpe Award recipient, this year’s watch list includes nine seniors, four juniors, and three sophomores. Three finalists for the award will be announced on Monday, Nov. 21, with the winner being announced Dec. 8 at the Home Depot College Football Awards Show airing on ESPN. The Thorpe Award winner will be honored at a banquet in Oklahoma City on Feb. 7, 2017.
King (5-foot-11, 200-pounds) has started all eight games at cornerback this season and has 46 career starts. This season he has recorded 26 solo tackles and 15 assists, leads Iowa with six pass break-ups, and had a 41-yard interception return for a touchdown in a win at Purdue.

King, a native of Detroit, also leads Iowa’s special teams through eight games. He is averaging 32 yards per kickoff return to rank sixth in the nation. He is also averaging 9.2 yards on punt returns. King had a career-best 77-yard kickoff return last weekend against Wisconsin.

In 2015, King tied the Iowa single-season record and ranked second in the country with eight interceptions, while recording 72 tackles and a team-high 13 pass breakups. He averaged 14.2 yards on 17 punt returns and 24.4 yards on 29 kickoff returns.

King was named a unanimous consensus All-American in 2015, was the recipient of the Jack Tatum Award and was named the Tatum-Woodson Big Ten Conference Defensive Back of the Year. King was one of five finalists for the Walter Camp Player of the Year Award, and was Iowa’s Most Valuable Player on defense.

Iowa is idle until Saturday, November 5, when it travels to Penn State to face the Nittany Lions, who knocked off highly-ranked Ohio State this past weekend. Iowa needs one more victory to be bowl-eligible.