This news story was published on July 16, 2015.
Advertise on NIT • Subscribe to NIT

The work shop was held at Grace United Methodist Church, 200 14th Street NW. The workshop was open to all who would like to see the North Federal Avenue Corridor (a narrow strip of North Federal Avenue from 9th Street to 17th Street) revitalized. The City sought to learn from residents and business owners their opinions about issues facing this neighborhood, including such questions as:

– Why do some businesses succeed in the corridor, while others do not?
– Given the realities of the North Federal Corridor, what kinds of businesses could be successful?
– What inhibits rehabilitation of buildings along the corridor, and what can be done about it?
– How does the condition of public infrastructure (streets, curbs, sidewalks, parking, etc.) affect investment in the corridor?
– and others identified by the public. 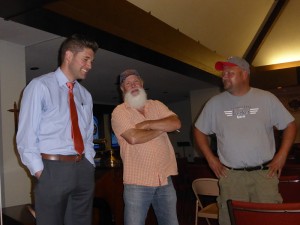 Current and former councilmen try to get to the bottom of the North End stigma.  (Alex Kuhn, Max Weaver and Travis Hickey)

“The City Council has directed staff to focus on the North Federal Corridor, to do something about the blighted areas and encourage redevelopment,” said Steven J. Van Steenhuyse, the City’s Director of Development Services. “We want to begin the process by talking with those people who are most directly affected by conditions in the North End. This workshop will help us to design a program for revitalizing the North Federal Corridor.” 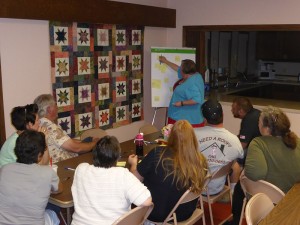 Small group discussion, as part of the workshop

About 40 citizens attended the meeting.  After a presentation explaining the city’s objectives, Mr. Van Steenhuyse asked folks to break into four groups in order to brainstorm ideas for the North End corridor.

Many of the ideas brought forth were connected to on-going concerns of citizens, including safety and crime issues; poor lighting; no signage; blight; bad sidewalks; no incentives for businesses to relocate to the area; the “North End” name; too many rental properties; and more.

The solutions from city officials from an earlier brainstorm session they held were what you might expect: An expansion of the “Micro-Enterprise” program (which has largely been a bust, except for Roller City, which continues to take $5,000 a year); more volunteerism, more code enforcement, and more seeking of grant dollars for upgrades.  Another idea kicked around was changing Federal Avenue from four lanes to two lanes, to usher in on-street parking on that street.

City officials held a workshop Thursday evening at Grace United Methodist Church, aimed at ending the stigma in the…

Posted by NorthIowaToday.com on Thursday, July 16, 2015

Posted by NorthIowaToday.com on Thursday, July 16, 2015