Beware: City Hall will rollover and play dead after sanitation department is privatized 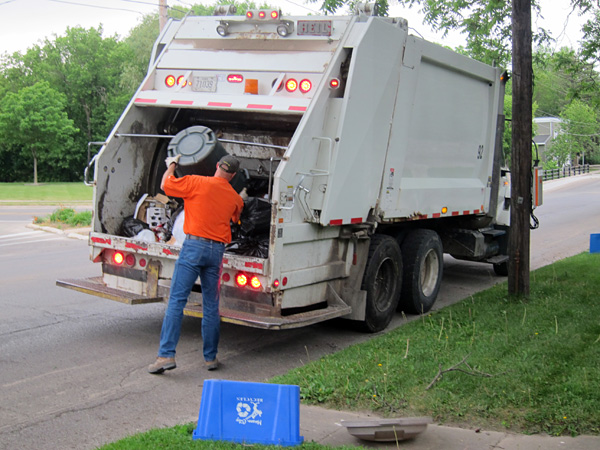 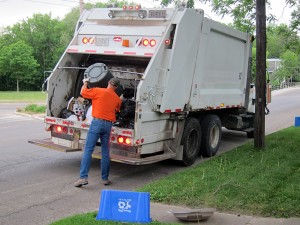 A story in the Ottumwa Courier caught my eye today.

As Mason City’s City Hall pursues the privatization of its sanitation department, another similarly-sized city in Iowa that is partly there just got a bill from out of nowhere for over $30,00o.

(PHOTO: A Mason City sanitation worker empties a trash can on East State Street earlier this summer.  City Hall is taking a hard look at eliminating the sanitation department.)

“Chamness Technologies, Inc., the Eddyville company that does compost hauling for the city, submitted a bill for two years worth of hauling and mobilization charges they had not previously billed, totaling $30,500,” the story says.

In Mason City, all the compost hauling is taken care of right now by our sanitation department.  There are no surprise invoices, fees or bills that City Hall must watch for, as it is all handled in-house.  We pay about $9 each for this.

Reading the details in the Courier’s story made me wonder… if the City goes private with its waste pick-up and disposal, who will oversee the operation from the City’s end and make sure there are no surprises?  Many have expressed concern that through bidding, fees from a private company would start low, and then once the City’s ability to pick up waste is dismantled (selling off of garbage trucks and other equipment, termination of sanitation workers, etc) the price will start to go up.

In other words, the City may be at the mercy of its “partner” at some point.

One would hate to see this befall Mason City: “Chamness employees submitted bills for the grinding charges but not the hauling or mobilization charges and no one noticed the discrepancy. Now Chamness is requesting the Solid Waste Commission pay the unbilled charges.”

What is to stop a private company the City makes a deal with from billing for this or that, or faulty workmanship, or just plain bad service?  One would hope an air-tight contract would solve this, but the City will not be able to control costs to the degree it can now.

Furthermore, current City Hall “leadership” should not be trusted to look out for you.

We have seen the City brush aside any possible responsibility private companies may have on other projects.  The most recent example is the 12th Street NW overpass project, costing the City tens of thousands of dollars to fix concrete issues and approaches.

The City had an opportunity to hold Henkel Construction, the general contractor, and WHKS Engineers responsible and share in the cost of fixing the problem.

Instead, council members Scott Tornquist and Jean Marinos showed what poor leaders they are.

According to meeting minutes from an April 12th council work session,  discussing the quandary the City faced with the bridge, Tornquist stated, with Marinos agreeing, “the problems were disappointing, but the City would spend a lot more money trying to assess blame.”

They didn’t even ask Henkel or WHKS to chip in; they just gave up and decided to pay the whole bill.

Do not trust this City Hall to fight anyone to save your tax dollars.  They are looking for the easy way out.

The finance department makes recommendations on how much, if at all, the monthly sanitation pick-up fees should be raised each year during budget hearings.  There are no surprises.  There very well could be if the City goes private.