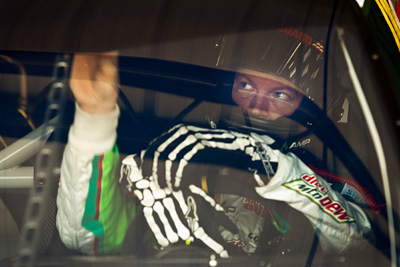 Johnson also won race No. 199 for HMS last October at Kansas but few thought it would take over six months before No. 200 — a feat matched only by Petty Enterprises — would be reached.

(PHOTO: Dale Earnhardt Jr. checks his rear view mirror in preparation for practice for the Bojangles’ Southern 500 at Darlington Raceway, Friday, May 11, 2012, in Darlington, South Carolina.)

Hendrick was on hand for the win, spending the final laps of the race atop Johnson’s pit box.

Biffle, the pole-winner Greg, took control early in the race, leading the first 48 laps before the start of a round of green-flag pit stops.

Kyle Busch inherited the lead after green-flag stops on Lap 52 until Biffle ran him down again on Lap 98.

The first caution was displayed on Lap 173 for debris in Turn 2. All of the lead lap cars pit for tires and fuel with Johnson still in the lead on the restart on Lap 180.

On the restart, Kyle Busch quickly passed Johnson for the lead only to see Johnson pass Busch back for the lead nine laps later.

Jeff Gordon and Hamlin made contact on the track on Lap 193, which left Gordon with a flat tire. A caution for debris then was displayed on Lap 194.

Drivers took a variety of strategies during the caution with Hamlin electing to stay out on the track. He led on the restart on Lap 200, followed by Kasey Kahne and Martin Truex Jr., who both took just two tires.

Another caution for debris was displayed on Lap 230 with all of the lead-lap cars electing to pit. On the restart on Lap 236, Hamlin continued to hold the lead, followed by Biffle and Truex.

A round of green-flag stops began on Lap 279. Once they were completed on Lap 284, Truex moved into the lead.

Bobby Labonte spun on Lap 298 to bring out the fourth caution of the race. Truex maintained his lead on the restart on Lap 304.

Regan Smith spun on Lap 307 to bring out the fifth caution of race. Most of the lead-lap cars elected not to pit and but Truex did. Johnson took over the race lead on Lap 312 followed by Kyle Busch and Hamlin.

On the restart, Kyle Busch dived below Johnson to take the lead.

Jamie McMurray and A.J. Allmendinger wrecked on Lap 316, bringing out the sixth caution of the race. Most of the lead-lap cars decided not to pit and Kyle Busch remained in the lead on the restart on Lap 320.

Reed Sorenson wrecked on Lap 331 to bring out the seventh caution of the race. A handful of lead-lap cars elected to pit but Johnson did not and he continued to lead on the restart on Lap 335 followed by Kyle Busch and Hamlin.

Kurt Busch slammed into the wall on Lap 361 in an incident that also collected Ryan Newman to bring out the eighth caution.