Reaping satisfaction from a grim job 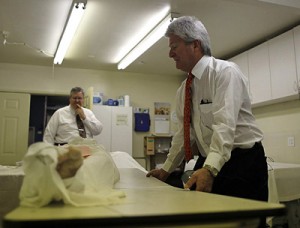 DESERT HOT SPRINGS, Calif. — Briefcase in hand, Steve Allen knocks on the back door of Rose Mortuary and Crematory. He’s been on the road for two hours, and it’s a little before 9; the late-autumn sun paints the distant cliffs of Mount San Jacinto yellow and gold.

Manager Thomas Moen is surprised by the visit. He glances about to make sure that the consumer guide and price lists are displayed as required by law.

“How ya doing?” Allen’s voice projects a robust exuberance.

“Fit as a fiddle … ,” says Moen without missing a cue.

They have known each other for almost eight years, and beneath the surface of their friendliness is a familiar tension. If the state’s funeral industry had police officers, Allen, 55, would be one.

He is a field representative for the state’s Cemetery and Funeral Bureau — a “mortician with a badge,” as he’s heard himself described — and is here to inspect the embalming and storage room and look at the price sheets.

Moen shares how busy the mortuary’s been, and Allen scans the room. He notices a framed newspaper article from 2009 when the funeral home invited visitors to sign memorial books for Michael Jackson, Ed McMahon and Farrah Fawcett.

“When they say people die in threes, there’s the proof,” Allen says.

Allen is a master of misdirection. After looking at the article, he checks the licenses mounted on the wall. Satisfied, he asks to go into the crematory and embalming room.

He knows how disconcerting the work might sound to an outsider — poking around funeral homes, looking into the backrooms and darkened closets for anything amiss — yet he does not take his authority lightly.

With a staff of 18 and an annual budget of $3.9 million, the Cemetery and Funeral Bureau employs nine field representatives like Allen whose job is to make sure licensed cemeteries, crematories and funeral establishments are not breaking state laws and regulations. The bureau is overseen by the Department of Consumer Affairs.

Allen lives in Oceanside and this year has logged nearly 20,000 miles inspecting 200 out of the 213 businesses monitored by the state that dispose of the dead in Riverside, Imperial and San Diego counties. Today he has two stops to make in the Coachella Valley.

He last visited the Rose facility in June to inspect the crematory. Moen had told him that the owners planned to replace the floor, and although it is not part of today’s inspection, the manager is happy to show off the results. As the furnace door opens, Allen peers through the flames and admires the workmanship.

Next he wants to see the room where the bodies are stored. Moen leads Allen to the 42-degree cooler. Allen looks beyond four corpses wrapped in white sheets and notices a chipped piece of Formica veneer. He angles a gurney out of the way and takes a photograph.

When Moen asks why, Allen explains the violation. “It’s exposed wood, and you can’t sanitize exposed wood,” he says. It will absorb fluids and blood-borne pathogens, presenting a health risk to the staff.

Allen can cite the regulation number, but in case he’s challenged, he carries a notebook that contains highlighted pages of the California Code of Regulations, Federal Trade Commission rules and welfare regulations governing the funeral business.

Inspections cover more than 110 requirements. Some are written to keep workers safe. Most, according to Allen, help ensure that families know what they are getting into when they purchase funeral services. For instance, he says, they need to know that embalming is not legally required and that caskets with sealing devices don’t preserve human remains. They also need to be protected from hard-selling tactics.

Violations, like the chipped veneer, are often minor, but Allen works with the assumption that if you keep an eye on the details, the larger problems will reveal themselves.

Scandals in the business are legendary — the funeral director in Riverside who sold body parts, the Northern California man who warehoused thousands of boxes of ashes that he had contracted to scatter from his plane, the cemetery in Compton with bone fragments and casket pieces spread about the grounds.

Allen has investigated his share. Most arise from complaints brought to the bureau: the family that felt the funeral home was slow in picking up the deceased, the family that believed the cemetery wasn’t maintaining their plot, the family that was offended by cursing in the presence of the dead.

His inspection completed, Allen reviews the findings, all of which represent quick fixes. Moen has the demeanor of a pulled-over motorist as Allen fills out a triplicate form and asks for his signature. Violations are judged in Sacramento, where fines, up to $2,500, may be waived or assessed.

California has been regulating the work of its funeral directors and embalmers since 1939. Most of the early laws secured the rights of the dead against such desecrations as grave-digging and “moral turpitude.”

Thirty years ago, thanks in part to the work of journalist Jessica Mitford, new regulations focused on protecting the consumer. Since 1984, legislation has required funeral homes to itemize their services. Most funerals had been priced as packages.

Doug Meyer, a Woodland Hills attorney, represents a number of clients in the funeral industry who find the regulations excessive.

Want to put your funeral home name and logo on a coffee mug? Be sure to include your license number. Want to sell wood caskets? Be sure to specify the color of the stains: light, medium or dark. Want to write a contract for a family? Be sure to provide them with a copy of the bureau’s 24-page consumer guide before putting anything in writing.

“It’s the old story of a good idea gone off track,” Meyer said. “Certainly consumers need to be protected, but when you wend your way through all the laws and regulations, then you see that the goal is sometimes lost.”

The bureau is reviewing regulations that might be outdated, according to its chief, Bev Augustine, but the spirit of the law will be maintained: the belief that families that visit funeral homes are emotionally compromised and vulnerable to businesses that would take advantage of them in their grief.

With a cellphone in his lap and diet soda in the center console, Allen is heading down Interstate 10 in his state-issued Ford Taurus en route to Rose Mortuary’s branch in Palm Desert. He adjusts his wrap-around shades and Bluetooth.

Allen managed a number of funeral homes in Los Angeles until 2003, when he heard about an opening in the bureau. He grew up in a military household and was ready to work law and order for the state.

The transition from the private to public sector didn’t take much time. He learned to keep the inspections friendly, but he has been told to go after the big fish and leave the small ones alone. He accepts it. “I’m not their friend,” he says. “I’m their regulator.”