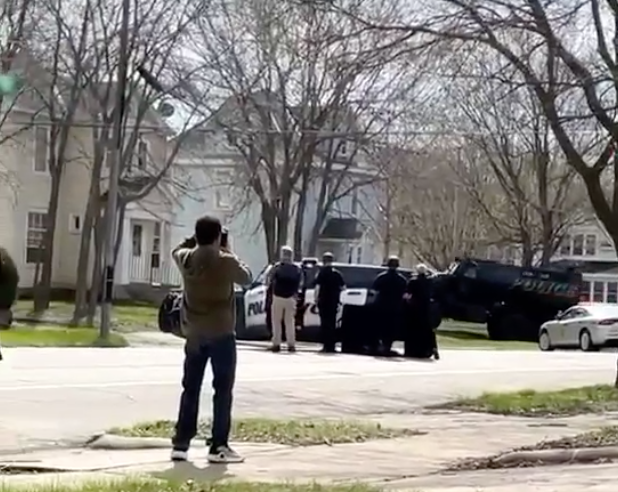 MASON CITY – Potential meth dealers refused to stop for police in Mason City Friday afternoon and were busted hours later after a standoff that involved an armored vehicle.

On Friday, May 6, 2022, at approximately 12:23 PM, an Iowa State Patrol trooper attempted to stop a vehicle west of downtown Mason City. The driver of the vehicle refused to stop and a pursuit ensued until the vehicle left the roadway and struck a tree in the 300 block of 1st Street NW. The occupants of the vehicle fled at this time.

Multiple agencies responded to assist and a perimeter was quickly secured around the area. One subject was taken into custody shortly after fleeing the crash scene. The other fled into a nearby residence. Based on the investigation made at the scene, it was believe that the occupants may be armed. Troopers worked to call out the second suspect repeatedly for several hours.

After the suspect refused to surrender, officers forced entry to the structure and used pepper spray to identify the suspect’s location. The Mason City police armored vehicle was at the scene and drove into a yard. At approximately 4:00 PM, the suspect surrendered and was taken into custody by troopers. He was treated at the scene and cleared for transport to the Cerro Gordo County Jail.

Cody Dean Dakin, age 35, was arrested and charged with the following:

Michael David Dalluge, age 27, was arrest and charged with the following:
– Possession with Intent to Deliver Methamphetamine – a class C felony
– Felon in Possession of a Firearm – a class D Felony
– Interference with Official Acts – a serious misdemeanor