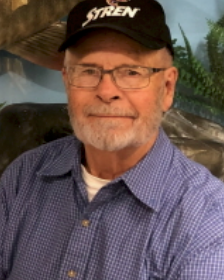 Visitation will be held from 5:00 to 7:00 p.m. on Thursday, August 18, 2022 at Hauser Weishaar Funeral Home. A rosary will be prayed at 7:00 p.m. led by the Knights of Columbus. Visitation will continue one hour before the funeral Mass at the church on Friday. The family requests that you wear a mask to the visitation and funeral Mass.

Kenneth Dale Rindels was born March 24, 1937 in Aplington, Iowa to Ede and Carrie (Haan) Rindels. In 1949, the family moved to Shell Rock where Ken graduated from Shell Rock High School. He was drafted into the United States Army on July 7, 1960 and attained the rank of Specialist E-5 and was honorably discharged the end of June 1962. After a few years of raucous living and spending time with motorcycle friends, he met Mary E. Scott, a very pretty and nice girl. They were married on May 6, 1967. To this union two children were born, daughter Kristine and son Kurtis.

Ken had several different jobs (DeWitt Lumber, John Deere, Olivers, Sears, owned a bait and tackle shop, and Theisen’s) and was a Jack-of-all-trades. He could make or repair most anything. Ken loved living in the country and purchased an acreage where they lived for forty-one years before moving to town. He enjoyed gardening, growing flowers, and feeding song birds. He liked trapping and hunting, but his favorite hobby was fishing. He fished in twenty-six different lakes in northern Minnesota and Wisconsin, as well as lakes and rivers in Iowa.

Mary and Ken enjoyed traveling. Ken had been in seven countries and most of the lower forty-eight States. He loved spending time with his family. He was a member of Immaculate Conception Catholic Church, Knights of Columbus, Wild Turkey Federation, National Wild Life Federation, and past member of the Ostfriesland Genealogical Society.

He was preceded in death by his parents; one sister-in-law; one brother-in-law; and sixteen aunts and uncles.

The family suggests memorials to be donated in memory of Ken to The ALS Association Iowa Chapter or National Wildlife Federation.