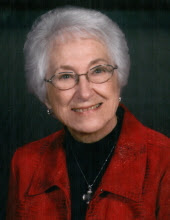 A funeral service for Wilma Clammer will be held at 11:00 a.m. on Saturday, December 18, 2021 at Trinity United Methodist Church in Charles City with Pastor Steve Hansen officiating. Burial will be at Sunnyside Memory Gardens in rural Charles City.

Visitation will be held from 9:30 a.m. until the start of the service on Saturday at the church.

Wilma Lucille (Winfield) Clammer, the daughter of William and Emma (Brunson) Winfield, was born April 9, 1924 in Augusta, Illinois. She began her education in Illinois before moving with her family near Charles City and graduating from Charles City High School in 1942.

Wilma was united in marriage to Thomas Clammer on January 6, 1943 in Miami, Florida when he was on shore leave from the United States Navy. The couple made their home in Charles City. Wilma worked as the manager at Sears & Roebuck in the repair department and then at JCPenney in the women’s clothing section. Later in life at 80 years young, Wilma became a waitress at the tea room in Charles City.

Wilma was a member of Trinity United Methodist Church where she was active with the Loyal Unity group. She enjoyed cross stitching, sewing (making clothes and dresses for her family), making dolls out of the pillow cases that her mother had crocheted and taking memorable trips with her family. Wilma loved spending time with her family, especially her grandchildren and great-grandchildren.

Wilma was preceded in death by her parents; husband, Thomas in 2002; son-in-law, Jerry Kayle; one brother; and two sisters.