MASON CITY – A man refused to stop for law enforcement Sunday night, leading to a slow-speed chase through Mason City and his eventual arrest on drug and other charges.

Details of Incident: On February 25th, 2018 at 10:54 pm a Cerro Gordo County Deputy attempted to stop 47-year-old Dean Miller of Mason City for driving with a suspended license near the intersection of 4th and South California Avenue. Miller refused to stop for law enforcement and continued into Mason City. The pursuit continued through various streets on the east side of Mason City and speeds did not exceed the speed limit by more than 5 to 10 miles per hour. There were no injuries and there were no vehicles damaged during the chase. The pursuit ended behind a residence in the 300 block of 8th street SE where Miller apprehended without incident.

Miller was subsequently charged with: Possession of controlled substance 2nd offense, an aggravated misdemeanor; eluding law enforcement, a serious misdemeanor; and driving with a suspended license, a simple misdemeanor. 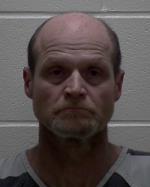