RURAL CERRO GORDO COUNTY – A convicted felon drunk driver from Clear Lake was back behind he wheel this weekend, and after he crashed his car, was arrested once again for felony drunk driving.

On Saturday, February 24 at about 9:11 PM, a Cerro Gordo county deputy went to assist a motorist near South Shore Drive and 240th Street in rural Cerro Gordo County. Near there, a vehicle had slid off roadway. At about that time, the driver, 63-year-old Jay Leslie Howie was located. After an in investigation, he was arrested for felony third-offense operating while intoxicated, failure to maintain control and driving with a revoked license.

Howie was jailed and soon released.

This is the second time Howie has faced a felony drunk driving charge. Shortly after 11 PM on Saturday, July 9, 2011, a Cerro Gordo County deputy made a traffic contact near the intersection of Finch Ave. and South Shore Drive in Clear Lake. As a result the deputy arrested Howie for felony third-offense operating while intoxicated, driving while suspended, failure to file SR-22 insurance, and false report to law enforcement.

After a plea deal, he was guilty of felony third-offense operating while intoxicated; the driving while suspended charge was tossed. He was given a suspended prison sentence, 30 days in jail, 3 years of probation and ordered to pay $4,408.75 in fines and court fees. 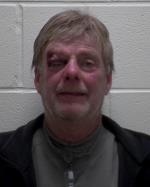