MASON CITY – Police were called to a troubled area late Thursday when it was reported a female was screaming for help and had been punched in the face, but she ended up behind bars after police investigated.

An emergency call was made to police around midnight Thanksgiving evening, reporting that a physical domestic fight was taking place at 213 North Monroe Avenue. It was reported that a female subject was screaming for help, was punched in the face, and a number of subjects were outside the house.

Police arrived and a female subject – Samantha Jolene Mcmillan, age 26 – reported she was injured. A male subject, Justin Mcmillan, allegedly left the scene in a car with no license plates with a child inside the car, who may have been unrestrained. Police began searching for him, but he retuned to the house while police were there. While there, Samantha Mcmillan requested to be taken to Mercy Hospital for her alleged injuries.

“She requested to be transported to Mercy by ambulance,” Mason City police told NIT Friday. “Officers let the MCFD do so. She was examined by medical staff and released. No visible injuries were located.”

After an investigation, police determined that Samantha Jolene Mcmillan allegedly bit Justin Mcmillan on the arm leaving an injury. She was arrested for Serious Domestic Assault once she was released from Mercy.

She remains jailed until she goes before a judge.

In 2012, Jolene Mcmillan filed in court a Petition for Relief from Domestic Abuse against Justin Mcmillan. 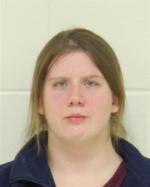